A Dog Named Slugger: The True Story of the Service Dog That Changed My Life 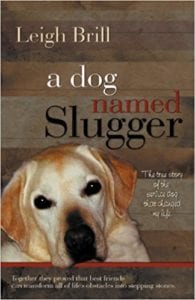 A Dog Named Slugger: The True Story of the Service Dog That Changed My Life

A man’s best friend is his dog. But what about a woman with cerebral palsy? For Leigh Brill, her service dog “Slugger” was not only her best friend, but a life saver.

Leigh Brill grew up dealing with the physical limitations of her cerebral palsy. Teasing from classmates was part of her daily school routine while her parents didn’t like to discuss her “condition.” By the time she was in college, mobility was becoming an issue. When her doctor told her it was time to consider a wheelchair, Leigh left the doctor's office and broke down in tears. She couldn’t bear the thought of relinquishing her freedom and resigning herself to a wheelchair – in her eyes, giving up.

One day while attending class, Leigh met another disabled woman, Anne, who had a service dog. The dog lay quietly under his owner’s desk during class but at one point, Leigh saw the dog pushing a pen along the floor. She thought it was cute until she saw the dog pick up the pen and hand it to Anne. Leigh’s amusement turned to amazement and after class, she asked Anne about her service dog. During the conversation, Anne suggested Leigh consider getting a trained dog. That advice turned into a life changing suggestion as Leigh’s eventual service dog, Slugger, gave Leigh the freedom and independence that she so desperately desired.

Life with Slugger proved to be quite entertaining. There are many stories in this book about how he kept a smile on his owner’s face through the years. One of his best exploits was a result of his love of rolling in horse and cow excrement. One day, while still fairly new to Leigh’s life, he snuck off to a nearby cow farm to enjoy the local “flavor.” Returning as a brown, rather than yellow Lab, Leigh had her work cut out for her to clean her companion, particularly since he hated baths. Fortunately, he loved being towel-dried afterwards. There are also emotional roller-coaster episodes recounted due to peoples’ lack of understanding of both Leigh and her service dog. There’s the job offer that came with the requirement that she leave her dog at home and the stranger in the post office who teased Slugger to try and get him to take a tennis ball and leave Leigh’s side.

However, the amazing abilities of Slugger are what truly changed Leigh’s life as well as the deep bond the pair developed during their time together. The affable Labrador could pick up and retrieve objects on command, steady Leigh as they walked in a store or outside on uneven ground, and he’s even credited with introducing Leigh to her future husband (in a doggie way). While aiding his partner, Slugger also taught Leigh how to let go of her fears. Tackling stairs had always been something she’d feared, having taken so many tumbles down them in the past, but with Slugger by her side, stairs were now surmountable.

A Dog Named Slugger is a very enjoyable, surprisingly upbeat tale of the remarkable talents and loyalty service dogs bestow on their owners. The writing style is relaxed, as if the author is telling her story to a good friend over a cup of coffee and makes for fast reading. I particularly enjoyed the various words of wisdom Leigh shared with readers such as, “some gifts must change hands in order to change a life,” (when talking about Slugger’s trainer handing his leash over to Leigh) and “the purest devotion can pass from one heart to another without a sound.”

Quill says: A very heartwarming book about the love and devotion a service dog and his owner shared.