A Distant Past, An Uncertain Future 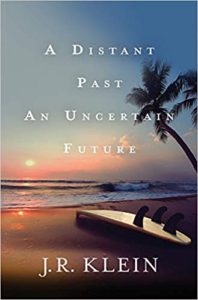 A Distant Past, An Uncertain Future

In this new book by award-winning author J.R. Klein, a writer finds himself blocked—by tragedy, doubts, and fear—yet strange messages begin to appear, calling him to seek new adventure.

Klein’s protagonist, Thomas Blake, is mad at himself for not simply writing another in the series of mystery novels that have won him, or more precisely, his pen-named alter ego Philip Keenly, wide acclaim. As Keenly, Blake created a hard-hitting popular hero, Evan Noir; but after the death of his beloved wife Kathryn, Blake abandoned Keenly and Noir, trying instead to live a quiet, almost anonymous life in southern California. But lately, things have begun to shift. Blake starts having early morning coffee in a café where youthful surfers hang out. A surfer himself in his youth, he enjoys observing two café regulars—the lovely Emelia and her charming boyfriend Gaucho. Then one day, Emelia approaches him and suggests he go surfing, igniting some spark within Blake’s nearly extinguished spirit. Soon the couple and he and a friend named Lenny are camping out on a Baja beach, and Blake is back on a board. After Lenny narrowly escapes from drowning, saved by Blake’s gutsy efforts, new changes start to snowball that will turn Blake into the person he’s been longing to become.

Novelist, playwright and world traveler Klein is here obeying the paramount rule for all fiction: write about what you know. In Blake there must surely be some of Klein’s inner workings. The author vividly examines the several ways that a book can come into being—all at once, complete from the beginning, or painstakingly, through increments of experience, reaction and reflection. He builds his story skillfully, from a central focus on Blake and his fading dreams to a gradual outreach to other characters, one by one. Why does Emelia have a repeated dream? Can Gaucho break free from his well-worn routine and start his own business? How will Lenny recover from his near-death trauma? Will Blake write another Noir bestseller—or never write again? And what does surfing, seen by some as a feckless waste of time, illustrate about other aspects of life? Klein excels in his descriptions of Blake’s encounters with waves, from the first time he gets on a board after so many years away: having a small success with one wave, “He wants a bigger one...soon, a good one will crest up…that’s always how it is…..” Turning a sad, reclusive writer into a joyous wave rider with a new, unexpected destiny is the author’s challenge, and he succeeds admirably.

Quill says: A Distant Past, An Uncertain Future is a satisfying mix of introspection and zestful action that has the power to tickle the intellect with a look inside a writer’s mind, while inciting the urge to pick up a board and hit the waves.

For more information on A Distant Past, An Uncertain Future, please visit the author's website at: www.johnrklein.com