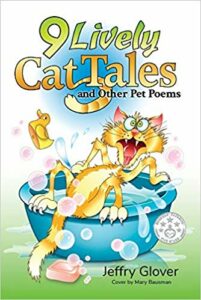 Jeffry Glover has a hankering for catchy rhymes and all things whimsical in 9 Lively Cat Tales and Other Pet Poems. The one-time school librarian and English teacher now turned poet, as well as the winner of a Robert Frost Foundation national poetry award, very cleverly designed his debut according to the mythical feline “nine lives” by dividing his eighty-one poems into nine sections.

Glover covers more feline territory than tuna and mice as he relays verse after verse of realistic to ridiculous rhymes. Meet a leopard who lives in the land of Katmandu, learn the dreaded tale of an Egyptian goddess cat, and a three-page ballad based on an 18th-Century favorite. There are real pets, too, along with all the elements that make up a pampered cat’s life. While feline troubles abound in a couple of different sections, Glover makes sure to incorporate wild cats, such as the lynxes, lions, cheetahs, and a curious variety known as “a liger.” However, all is not lost to the cat realm as Glover closes with doggie and other pet tales.

A delightful lilting quality accompanies Glover’s mix of rhyming schemes that are set mainly to couplets, alternating rhymes, and ballads. Add to that, his ability to break up any chance of monotony by periodically completing sentences in following stanzas. While he admits to drawing inspiration from many sources, such as William Blake and Edward Lear, to name a few, this reviewer would like to add Ogden Nash to the list since Glover has a way of occasionally yet succinctly weaving in fabricated words as well as the element of surprise. A great example is his poem titled “Why the Lynx Isn’t Famous.”

The lynx is not a cat with fame
Due perhaps to its strange name,
And unlike lions with shorter mane,
All reasons fame it can’t obtain.

For felines like this we feel sorry,
Or should since it gets no glory.
Its sized may also be to blame,
From its perspective just a shame.

So what’s the lynx supposed to do?
These facts won’t change because they’re true.
Of course the lynx could simply lie,
But what’s the use? Why even try?

The lynx could mount its own campaign,
A PR effort aimed to gain
More public notice and attention.
How about a lynx convention

Complete with national TV speeches?
After all, the media reaches
Lots of folks who might react
Well to such a dark horse cat.

Alas, this likely will not happen.
The lynx is shy, too often nappin’
In the forest undercover,
Hard to search for or discover

Where it spends its daylight time
On the ground or when it’ll climb
Up a tree to take a nap,
Far too wild for a human lap,

When all it wants to do is snooze,
For humans simply has no use.
And that’s the problem with the lynx,
So far its reputation stynx.

Quill says: An enjoyable read from end to end, 9 Lively Cat Tales and other Pet Poems opens readers to the fascinating world of felines.

For more information on 9 Lively Cat Tales and Other Pet Poems, please visit the author's website at: www.JeffryGlover.com