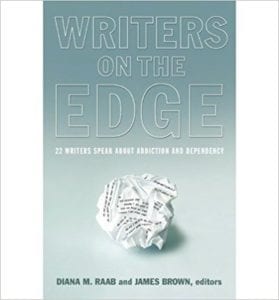 Scalding, unflinching, in-your-face right off the bat, the Foreword of this book is chilling, preparing you for the stories inside. This anthology comes from the minds of truly amazing authors and isn't for the faint of heart. Each one takes a look at the harsh reality of their own addictions, as well as some who deal with a family dependency - living in fear that the next generation will follow the same path.

The compilation shows a world that may be a great deal different than your own, but each piece is told with truth - which is something not often found today. As anyone knows who suffers, or has a family or friend they watch suffer from an addiction, the isolation, depression, and self-loathing is almost impossible to bear. From alcohol to drug abuse, overeating, depression, cutting, as well as the need for love through empty sex, addictions and obsessions are numerous.

Although it's impossible to highlight each story, there are many that stand out. Scott Russell Sanders delves into his childhood, watching his father slip away from the family and into alcohol. He offers the thoughts of a child, who lies in bed awake and scared. Not scared of the abuse (which he doesn't receive on a physical level), but scared because he feels he’s the one responsible for his father’s drinking; if he could be a better son, perhaps his father would be sober. This in-depth look into the detriment of a family, and a man who doesn’t want to become what his father was, is a stunning piece of writing.

Linda Gray Sexton talks about loss and how cutting is a release. Sitting in a car just needing that overwhelming pain to come 'out' no matter what her therapist says, her horrific memories will scare you to death. Sue Silverman delves into the world of love. Romance is told in all forms in this day and age, but when the 'physical' was the entirety of the love you received from your own parent, an addiction can form where the only way to get love from a man is with the body. Yet another writer speaks of overeating - a way to stop depression and feel love - although neither ever happens by eating more food. She speaks of support groups, and how being able to see that others are on 'your side' does wonders for a person on the edge.

The Barthelme brothers tell a very different tale of an addiction that can't hurt - gambling. There's no risk when you have money in the bank, it's simply an entertaining addiction that hurts no one. With the inclusion of this piece and others like it, readers are shown that with every triumph over addiction, there are also those who remain in the deep end of the pool.

These writers are truth-tellers, and they have the words. For the writer out there, this is a lesson in dignity and courage when it comes to putting pen to paper. The scariest prospect for a writer is to lose their words and end up living in a black and white world inside their mind. Listening to their struggles, triumphs and defeats is both heart wrenching and eye-opening.

Quill Says: This isn't frilly or sweet. There are no fantastical characters. Be ready for the truth but, most of all, be willing to listen.

For more information on Writers on the Edge: 22 Writers Speak About Addiction and Dependency, please visit the author's website at: www.dianaraab.com