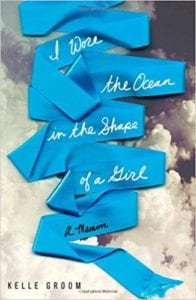 As readers all know, there are books out there on the market that entertain, romance, thrill, scare, and teach. This is a unique book, however, because it does each and every one of those things and more. Using a powerful “voice,” it will be an impossible struggle for many readers as they try to figure out how to put it down; or, whether or not they can continue reading.

Kelle Groom bares all, from mistakes to tragedies, to triumphs and pain. The Groom family history is told through various stories including that of Kelle’s son’s cancer. The author leads readers down her horrific path that began as early as fifteen, when Kelle decided that only with alcohol could she make it through the day. This is a young woman who blacked out in high school, and hooked up with males that made sure to “egg” her on and hurt her as best they could. This was an empty shell of a girl; this was a life that was already over, with Kelle simply waiting for the end to come.

At nineteen - who knows why, or what Higher Power could’ve thought it would be a good thing - Kelle became pregnant and made a good choice, finally, by realizing that there was no way she could support or care for a child. With the custody being given over to her Aunt and Uncle, Kelle’s son Tommy went to live in a much happier environment. The absolute worst would come to pass, however, when Tommy died of Leukemia at only fourteen months of age.

Kelle, through journals that she kept, has taken a great deal of strength to write this story. Some will despise Kelle for what she did; some will be supportive and happy for her recovery. While others will read about the tragedies and horror that Kelle went through which included abuse, rape, alcoholism, and abduction, and find themselves sickened beyond belief.

Kelle is very open and honest throughout - sometimes brutally. She touches upon the horrors that exist in this world - horrors that others are living through right this minute. She still searches for the reasons for it all, and for her Tommy whose soul was taken to a better place. Kelle Groom searches for her son’s body and the truth, which she may never find. But having the ability and the power to come “out” and get “clean” is something that can not be “reviewed.” It is something that the reader has to experience for herself.

Quill Says: This is an exquisitely written, humbling, and frightening story of survival and redemption, from a woman who may forever have a brutal path to walk.