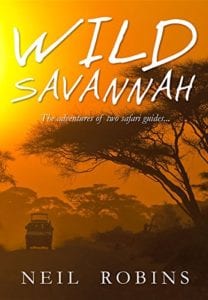 This memoir is a good example of creative non-fiction. The author is a retired police officer who spent a considerable amount of time in Africa. He did have an opportunity to work as a guide on wild-camp safaris. The tales in his book are based on his experiences and those of his friends who were career guides. He has expanded and dramatized most of their stories to turn them into a mixture of fact and fiction. They are presented as the experiences of two young men. They are close friends and dedicated to their demanding jobs keeping their clients safe in natural environments. Wild-camp safaris are not luxurious, but camping adventures for clients who want to view, not hunt wild animals.

These tales describe every detail of the exhausting and sometimes frightening journeys experienced by those on the safaris. They also introduce the reader to the realities of life and death in savannah environments. The guides explain their clients are stepping into sanctuaries where the animals are free to follow their own inclinations and instincts. When unexpected emergencies occur, they must absolutely obey the guides in order to stay safe and survive.

When one group inadvertently walks through the middle of a pride of lions, they are told to crowd together and stay absolutely silent. They are between two lionesses and their cubs. To retrieve their cubs, they silently circle around the group before the alpha male charges them. Fortunately he stops when he is satisfied he has adequately demonstrated his superiority.

The most touching story concerns a zebra foal who gets stuck in the sticky mud at a water hole. The guide wades through the mud to get a rope around him and eventually uses a truck to pull him free. In the mean time, a crocodile has grabbed his tail and one brave English teenager struggles through the mud with a machete and cuts his tail in half to free it from the crocodile's teeth. Eighteen months later, the same guide encounters a herd of zebras. One magnificent stallion does not run away, but walks up and stands in front of him. Half Tail had recognized the human who had helped him. He lets the guide talk to him for several minutes while he nods his head, then he turns and gallops back to his herd.

Some tales describe the greed and cruelty of poachers and hunters while others illuminate native skills. When four clients and their guide venture onto the wild waters of the Mighty Zambezi, their raft-guide saves them over and over. A few tales concern mishaps, such as the time the group returns to camp and finds two lions resting on the top of their trailer after eating their dinners. They could hear the cries of the terrified cook hiding in the trailer. The guide uses the sound of the Land Rover's diesel engine to scare them away.

The author has expanded and dramatized these real-life stories to turn them into a mixture of fact and fiction and the book reads like a non-fictional memoir. The characters are a bit stiff and none of them really come across as real personalities as they would in a good novel, but it's still a very enjoyable read.

Quill says: If you are interested in the wild animals of Africa or going on a safari, this book is well worth reading.