When She Was Gone 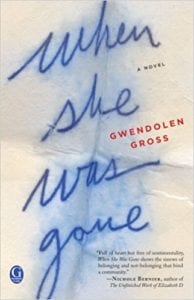 When She Was Gone

26 Sycamore Street is where Linsey Hart was before she disappeared in Gwendolen Gross’ latest novel, When She Was Gone.

Linsey Hart would be leaving her quiet New Jersey neighborhood to attend her first year at Cornell College in a few short days. However, there’s a problem. She’s gone missing. The last person to see her alive was her eccentric neighbor Mr. Leonard—former music teacher who lives at 24 Sycamore Street. Chronic insomnia was as much a curse as a gift for Leonard given the endless hours he spent awake and completely enrapt in his ongoing ritual of composing music. He was uncertain whether he heard Linsey whispering into her phone from the safety of her front porch rocker the night before or maybe it was the voices inside his own head…

In the early morning dawn the next day and long before respectable small town communities embrace the new day dawning, Linsey quietly slipped out the front door of her 26 Sycamore home; taped her note to the mailbox and continued down the steps. As she adjusted the strap to her duffle, she didn’t bother to look back as she placed one foot in front of the other. Perhaps if she had, she would have noticed the breeze that kicked up and did not subside until it released her note taped to the box. Nobody was there to witness its departure as it cascaded down to the porch below and effortlessly slipped through the crack before landing in its final resting place in the foundation below.

Maybe Linsey’s decision to go missing was because her mother, Abigail, spent way too much time planning every facet of her life—the most recent implementation being the insistence Linsey break up with her boyfriend Timmy. There was no point for the two of them to continue seeing each other. Timmy was headed to California for college while Linsey would remain on the East Coast. Abigail rationalized her mandate further by insisting Linsey was too young for an ever after union at this juncture in her young life. The reality that Linsey has gone missing accelerates when Abigail’s forty-something, over-sexed housewife/mother and neighbor, Helena, at 6 ½ Sycamore Street enlightens her with the fact Linsey never showed up for her summer babysitting gig that particular date. If only that note hadn’t slipped between the cracks on the porch hours earlier.

Ms. Gross was very consistent in painting clear images with her words as she introduced each of her characters who lived on Sycamore Street. However, beyond that, Ms. Gross disallowed the reader to engage and formulate his or her own mood because she overcompensated with an abundance of analogous and metaphorical depictions. This is not meant to be a slight as much as an observation. Generally speaking, one of the more prominent pleasures I look forward to when reading a good story is to have the opportunity to formulate my own opinion based on the scene or situation played out across the pages. It entices me to turn the pages to find out what happens next. There is no question Ms. Gross was directing her audience. However, she controlled too much of the story with her analogies and metaphors which disallowed this reader to wonder what would potentially happen next. However, I will give her credit for her portrayal of the relationship between mother, Abigail and daughter, Linsey. I have a ‘baby’ on her way to college this year. It’s a monumental time in a mother and daughter’s life and I think Ms. Gross was very connected in not only conveying the imminent change on her two characters’ horizons but what that would mean for both women as well.

Quill says: When She Was Gone is a solid depiction of the contrasts between belonging (or not) with an ending that is far from predictable.