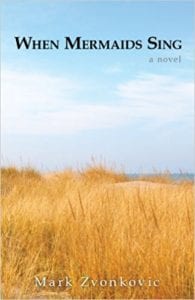 On the surface, When Mermaids Sing is a novel about a young man’s efforts to free his cousin from an insidious religious cult on Cape Cod during the early 1970’s. But dive deeper to discover this novel to be a coming-of-age story about the protagonist, 26-year-old Larry Brown, a highly cerebral, fairly innocent, heart-on-his-sleeve romantic during the first major personal challenge of his life.

Larry enters the story as a privileged, sheltered young man confined by his intellect. The tone of the novel, with its frequent literary references and intellectual debates, reflects Larry’s consciousness as a person centered in his cerebrum. He comes honestly by his limitations as he grew up in an intensely academic family where scholarly debate was de rigueur dinner table fodder. In Larry’s family, one is expected to opine in great detail about the poet W. H. Auden, the Platonic paradox, and the 16th century painter Breughel all at the same time.

And while his intellect is burly, Larry’s emotional development is still quite undeveloped when we first meet him. He finds himself helplessly toyed with by his insincere girlfriend Millie while being pummeled by the anguish of unrequited love. The author portrays Larry as poetic in his torment. “Only a few minutes ago, the world was wildly spinning in its rotation. But time is fickle. When I look up into the dark sky, the lightning flashes suddenly, and I see Millie’s naked back and Bevins staring at the wall. I will carry around that image in my mind until I die.”

The yang to Larry’s yin is his former college roommate Hal, who also descends from the ivory tower of academia to teach alongside Larry at a middle school in Medford, Massachusetts. Larry and Hal have a great bromance with the total frankness, unconditional acceptance and spontaneously erratic bar-hopping pleasures that comes only from a committed friendship formed in one’s 20’s. Unfortunately, as the story transitions from character-based to plot-based about halfway through the book, Hal becomes a backburner player thus depriving readers of the transformation of their friendship through this crisis.

Zvonkovic flavors the text with Larry’s post-adolescent, casual turn of phrase as well as a highly literary poetic lyricism, reflective of both sides of Larry’s personality. While the plot remains a subtle undercurrent, the main force of the text is Larry’s philosophical observations about life as he grapples with who he is in the world. Zvonkovic gracefully leaps through time and space as readers pleasantly follow the stream-of-consciousness narrative of When Mermaids Sing. Larry ponders at his parent’s cocktail party, “An experience is a collection of perceptions, all of which combine contemporaneously. It’s all very abstract …An experience expands or contracts geometrically depending upon the collection of perceptions involved...” In this groovy, almost Beat poetry style, the author captures the phase of life – and in our nation’s development - when one still has the time and intellectual restlessness to consider, contemplate and analyze behavior and experience as an observer rather than participant in life.

As Larry goes to great measures to extricate his cousin from the cult, the author prompts readers to question their own belief systems. What is free will? What constitutes legitimate religion? What is brainwashing and how does it differ from religious belief? And finally, the good ol’ What is the meaning of life? The way the author presents these various debates without pushing a particular argument would make When Mermaids Sing a very good selection for a book club and a satisfying read on one’s own.

Quill says: When Mermaids Sing is a coming-of-age story about an erudite, contemplative young man that prompts readers to examine their own beliefs and convictions.

For more information on When Mermaids Sing please visit the book's website: WhenMermaidsSing.com