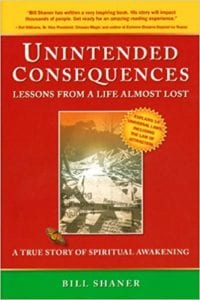 You might think a memoire of a man left paralyzed from the waist down after a horrific construction site accident might be depressing, but let me assure you Unintended Consequences: Lessons from a Life Almost Lost is not at all bleak and dark. On the contrary, it is inspirational and uplifting. Bill Shaner’s story will make you pause in wonder at the healing capacity of the human spirit. He is an ordinary guy with an extraordinary ability to channel the power of spirit to work wonders in his life, and he would like to show you how to do the same.

Twenty years ago, Shaner was on top of his game. He owned his own successful construction company, he was comfortable financially, he was in a promising love relationship, and he was healthy and fit. Then one day a building literally collapsed on top of him, and in doing so brought down all the walls of his life. But for some reason instead of resignation, Shaner maintained a determined and nearly unswayable conviction to survive and walk again. Even on the day of his accident as he was embarking on the thirteen-hour surgery that would save his life, Shaner is astoundingly adamant that survival and recovery was his only option. “I told myself that I would not be paralyzed for long. I was going to look normal, act normal, and feel normal. I wanted that clear from the start. I wasn’t going to take the easy way out, and neither would the medical team that was putting me back together.”

Certainly many people in Shaner’s dire situation have had the same firm determination to make a full recovery yet they never walk again. What makes Shaner different? According to him, he is a fighter and control freak. He also relays the story of a rock-bottom low moment soon after his accident when he was at his most depressed state and in constant pain despite being on morphine when he promised God that if he were healed, he would go to church. Shaner then says, “…I heard a voice clearly say, ‘Everything is going to be all right.’ Everything is going to be all right…I heard it and I knew it to be true.”

As he made good on his promise to go to church, Shaner informs readers about his discovery of the power of the self to make self-actualizing change in one’s life. “Life doesn’t just happen to us; we are participants. It’s all about choices and how we respond, act, and reaction to every situation…How we feel about ourselves and how we choose are connected.” Thus the second part of Unintended Consequences reads more as a self-help manual than a memoire as Shaner brings together various motivational philosophies, from the Bible to the Laws of Attraction, in order to provide a comprehensive blueprint for life improvement. Shaner presents several “life tenets” that he recommends readers to consider and apply to their lives in order to expand their potential and ultimately their life happiness.

Although at times Shaner launches into self-help speak and bumper sticker wisdom, it’s hard to fault him since his vision is so hard won. Not only does he have the experience to back up his beliefs, the author also presents his ideas with a down-to-earth sincerity that prevents his advice from coming off as overly hokey or New Age-y. Shaner writes, “If I can do it, I know it’s possible for everyone to do it.” And he doesn’t claim to be perfect. He just claims to be consciously working toward maximizing his self-realization skills, and he wrote this book to provide others with the tools to do the same in their lives.

Shaner effectively organizes his toolbox of life-actualizing skills in an easy-to-absorb manner. Unintended Consequences may be one of those books that some readers keep on their bedside table in order to dip into it from time to time to pull out reminders of how to bring positive change into their lives. Indeed, I found myself underlining key nuggets of wisdom in an effort to remember and utilize them in my own life.

Shaner says several times that he never intended to write a book, but he felt compelled to put to paper the life tenets that helped him get through his challenges. Nevertheless, this reluctant author has written a well organized, nicely edited and carefully researched book. Shaner effectively relates the highly dramatic story of his accident and the lessons learned thereafter in a concise, straightforward style that clearly displays his spirit, personality and humor.

Unintended Consequences is Shaner’s cheerleading effort to help people learn in an easier way what he had to learn in a very, very hard way. As he writes, “This book is an opportunity for you to express through yourself the direction you wish your life to travel. If this book touches one other soul, then I have done my job – and what I have been asked to do. Perhaps that soul is you.”