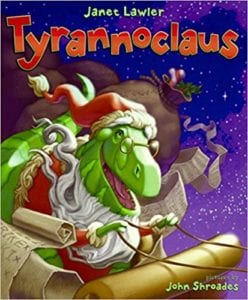 All mama dinosaurs tell their little dino children that if they are especially good during the year, Tyrannoclaus will bring toys to all good boys and girls. A little apatosaurus looked wistfully up toward the North Pole at the volcanic "crater bowl" where he knew Tyrannoclaus's helpers were making toys just for him. The moon was full and the stars were bright, but not quite as bright as the eyes of a little one who still believed, because it "`Twas the night before Christmas in dinosaur land" and Rapto, Rexy, Mimus and Saurus would soon be pulling that sleigh into the sky. In the meantime the helpers scurried to finish up the last minute details on toys and wrap them up. The toys were loaded on the sleigh, but something began to rumble on the Pole…

"The mountain erupted! Tyrannoclaus stopped,
the sleigh stuck in lava that sizzled and popped.
His beard singed with embers, he tried to push off.
His eyes began stinging. He started to cough."

Tyrannoclaus began to struggle with the reins of his sleigh as the flames whipped, rolled and whirled around them. The sleigh was heavy with presents for the little dinos. The list was long and "the youngsters all snored…while dreaming of goodies, they rumbled and roared" but were Makia, Anato, Ichthy, and all the other dinosaur children going to be disappointed? Watch out, watch out!

This whimsical tale will delight parents and WOW the young dinosaur lover. Clement Clarke Moore's traditional tale is simply going to have to take a backseat to this rowdy `n rambunctious crowd of prehistoric dinos who, by hook or by crook, are going to make it through some very dangerous skies to get to the children on their list. I do believe I had a smile on my face through the entire book. The artwork on every single page is wildly vibrant, bold and colorful and meshes perfectly with this story in rhyme.

Quill says: Tyrannoclaus, although unlikely to push traditional Christmas stories to the side, will have a new generation of children asking you to read it the night before Christmas!