Through Frankie’s Eyes: One Woman’s Journey to Her Authentic Self, and the Dog on Wheels Who Led the Way 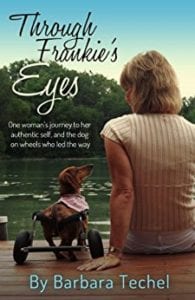 Through Frankie’s Eyes: One Woman's Journey to Her Authentic Self, and the Dog on Wheels Who Led the Way

What happens when one woman, trying to find herself, falls in love with one very special dog? A deep bond develops that can carry the pair through just about anything life might throw at them. That’s the story of Through Frankie’s Eyes.

Barbara Techel was a young wife, with a loving husband, but no real direction in her life. She had worked for over a decade at a job she liked until a manager, who kept taking credit for her work, got the best of her and she left. She eventually went to work with her husband, doing office work for their construction company. But money was tight so Barbara, with her husband’s blessing, took $400 to invest in a vitamin supplement marketing business. Unfortunately, Techel didn’t have the makings to be a pushy saleswoman and so, the job never took off for her. She didn’t give up, though, and after a year, was planning on taking a test that would take her to the next level with the company.

Right before the weekend of the test, Techel found a lump on her beloved chocolate lab Cassie. Managing to get through the stressful test while worrying about her dog, Techel rushed her dog to the veterinarian as soon as she could. After a series of tests, the vet told Techel that the news was not good. Cassie had bone cancer and while there was medicine that could prolong her life, she didn’t have long to live. It was only with the love of her family and her other very special dog, Frankie, a sweet dachshund, that Techel managed to get through the trying time.

After Cassie’s passing, Techel and her husband brought a new dog into their lives. Kylie, another lab, and Frankie loved each other from the start and all seemed well. While Techel still struggled with finding herself, and a job that would bring meaning to her life, she counted her blessings and tried to move on. That was until Frankie had an accident that could possibly end her life.

Through Frankie’s Eyes is as much about Frankie’s owner as it is about the dog. The struggles Techel went through, the jobs, the insecurities and feelings of guilt, experiences with a life coach and how she eventually found her life’s calling, all play a part in this story. The book is a fairly quick read and while it took a bit to get to the “meat” of the story, the reader will be rewarded with a touching story once that happens. It seems that all is lost when Frankie gets a crushing diagnosis, but that is truly the beginning of a new life for both the adorable dachshund and his loving owner.

Quill says: You might just shed a tear as you read about the love between Frankie and Techel, and how they saved each other’s life.