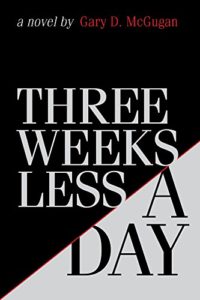 Gary D. McGugan delivers an epic adventure/thriller in the first novel in his Multima Trilogy of Corporate Intrigue, Three Weeks Less a Day.

Wendal Randall has come a long way since his nerdy status in school. He’s borderline genius when it comes to navigating the intricacies of all aspects of technology and configuration. Not only is he viewed as an asset to Multima Corporation, but it seems Howard Knight, a powerful director with Venture Capital Investments (VCI) has taken more than a passing interest in Wendal. And speaking of talent, Suzanne Simpson has done an admirable job of climbing to the ranks of corporate fiefdom with the coveted title of President in her division of Multima Corporation. The trifecta of top talent is financier extraordinaire, James Fitzgerald. Of course, none of these names and their respective titles would mean anything had it not been for their employment with Multima Corporation and the guidance from founder and chief executive officer, John George Mortimer. They are about to be tasked with a life changing opportunity that, if they succeed, will implement game changing future successes for Multima Corporation. Now all they need to do is figure out how to deliver while navigating insurmountably turbulent tides that lie ahead for each of them.

Meanwhile, John George Mortimer has company demons to keep at bay. It would seem Multima’s legendary CEO, one of the richest men in the country with billions in personal wealth, has opted to test the reactionary waters. Curious as to what the fallout would be if he elects to leave the company at fiscal year-end, it’s time to make the announcement and see how long it takes before the sharks begin to circle. Of course, there are other motivating factors for Mortimer’s announcement. He's simply opted not to share that information quite yet. Sadly, in a world full of leaks to the press, while Mortimer’s intentions were to keep certain information quiet, someone from within saw great personal gain in releasing the news. He simply couldn’t help himself and opts to strategically share the news in hopes the hit to Mortimer would be one to knock him down once and for all.

In this first of his three-book series, author Gary McGugan is off to a great start. This book is the equivalent of Secretariat at the starting gate of the race that would secure his triple crown win! McGugan clearly has a fantastic eye for detail and is quite the gardener when it comes to planting seeds only to watch them turn into full blown gardens as the story progresses. The characters are diabolical, heroic, villainous and likeable all at the same time. Each one has a distinct spotlight shining upon him or her when its time for their respective ‘center stage’ in this read. The format/flow of this book is polished in that McGugan plays a heated game of tennis among the characters from chapter to chapter. He showcases their whereabouts and happenings and whatever their current plight may be. There is no point throughout this read where McGugan’s audience has the remote chance of getting lost or confused. Rather, he spends just as much time tying lose ends together immediately after each crescendo in the plot before moving on with yet another whammy of a situation. I look forward to jumping into the next book in this series. This was a truly entertaining read.

Quill says: A lot can happen in Three Weeks Less a Day. This is a must-read!