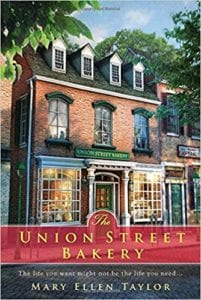 Mary Ellen Taylor has written an endearing story that focuses on the essence of family and how their bakery business tied all members together in her latest novel, The Union Street Bakery.

Daisy MacCrae knows far more than most what it means to be abandoned. Her birth mother, Terry Davis, settles her three-year-old daughter at one of the café tables at the Union Street Bakery. She pacifies her with a couple of sugar cookies before turning her back on her forever; or so it would seem. Fortunately for Daisy, the MacCrae family owned the bakery and was more than willing to adopt Daisy into their family once the reality struck months later her birth mother had no plans of returning. Growing up with her adoptive sisters Rachel and Margaret was often challenging for Daisy. It wasn’t for the lack of love in the MacCrae home. Rather, it was the sense Daisy had had since that fateful day. She believed she was loved, but couldn’t grasp a sense of belonging.

Fast forward thirty years later and Daisy finds herself returning to her Alexandria roots. After a successful career in the fast-paced financial district in Washington D.C., it seems Daisy was a casualty of poor choices and risky measures once again; this time thanks to the financial crash the entire country was reeling from. Licking her wounds and returning to her childhood home, Daisy is feeling the punches of defeat. Not only has the financial job market tanked, but her personal finances are in ruins. In turn, she is forced to make the hard choice of relinquishing her D.C. lifestyle and move in with her parents in the attic apartment above the bakery. To compound her defeat, her once-upon-a-time fiancé, Gordon, happens into her life again. It seems he too is over the world of finance and has opted to take a different turn in his future. It just so happens he plans to open a bike shop within walking distance from The Union Street Bakery. Between family ties beginning during the days of slavery to present day regular customers, perhaps it’s not such a coincidence Daisy returned to where it all began thirty years before.

Mary Ellen Taylor has done a superb job of painting credible dynamics of sisterly love (or the lack thereof at times). I have a personal reverence for the way she has played out Rachel, Margaret, and Daisy’s relationships as I have two sisters of my own. I found myself smiling often because the combination of two works well. It is when the third member joins in, that ‘odd man out’ has a propensity to raise its ugly head. What also resonated is the locale of the story. She has done Old Town Alexandria and the allure of the mighty Potomac River justice in her descriptive portrayals. I say this because I am quite familiar with the area. I have fond memories of Union Street and the surrounding area and the descriptive value in her writing resonated with me. Ms. Taylor has managed to create more than an escape or entertaining account for the reader. Rather, she beckons the reader to walk alongside her and listen to the beautiful tale she shares with her strong voice. I look forward to hearing her next story.

Quill Says: The premise of ‘life happens’ is realistically captured through Ms. Taylor’s vivid imagination. One can almost feel the warmth, comfort and aroma of fresh-baked bread with each turn of the page.