The Perfect Horse: The Daring U.S. Mission to Rescue the Priceless Stallions Kidnapped by the Nazis 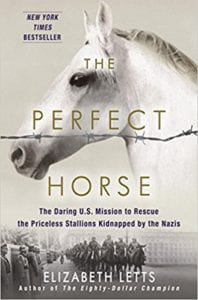 The Perfect Horse: The Daring U.S. Mission to Rescue the Priceless Stallions Kidnapped by the Nazis

Beautiful horses, a devastating war, and a ragtag group of men, from opposing sides of the war, who band together to save those horses form the basis of this fascinating, well-researched book.

The history of the Lipizzaner, and how the beautiful white horses were almost completely destroyed during WWII is known to most horse lovers (and many history buffs too). That history, however, is based more on myth than fact for many whose knowledge of events is taken from such movies as the Disney produced Miracle of the White Stallions. To understand what really happened, author Elizabeth Letts, in her The Perfect Horse, has painstakingly researched the events leading up to the Nazi's seizure of the white stallions, what happened to the animals during the war, and just what really took place in the daring rescue of Vienna's prized Lipizzaners.

Letts begins her book with background on two of the major players in the Lipizzaner story, Alois Podhajsky, the director of the Spanish Riding School, and Gustav Rau, the man in charge of bringing Hitler's eugenics theories to the equine world. These two were meeting, not on the battlefield, but at the 1936 Olympics in Berlin. The author delves into the history of these two men, as well as other key players, prior to the war. She introduces the reader to the major equine players too, from the beautiful Arabian stallion Witez (not all those horses stolen/rescued were Lipizzaners) to Neapolitano Africa, Podhajsky's personal mount. We also, at a later point in the book, meet the Americans who would risk everything to save Vienna's most cherished possession. What, exactly, in their backgrounds promoted their willingness to save these famous horses?

Not just a book about the rescue of the beloved Lipizzaners, the author had given the reader a complete picture of those years leading up to war. The early chapters of The Perfect Horse follow the effort to move the valuable livestock out of the way of the advancing Nazi troops. This is followed by the failure of that attempt, and the fate of the horses during the war. The reader gets to know Podhajsky, and what he had to do to protect his horses throughout the long years of the war. The late night train rides amid bombing raids to save the horses come to life with Letts' pen. By the time the daring rescue is being planned, the reader knows well all the players that made it happen, from General Patton to Colonel Hank Reed, the commanding officer of the 2nd Cavalry, the unit that saved the horses.

Author Elizabeth Letts has done an amazing job of researching a well-known but not necessarily well-understood rescue that took place during WWII. The people, the horses, and the places all come to life within the pages of The Perfect Horse. Not weighted down with heavy use of dates and dry material as so many history books are, the author has made extensive use of unpublished first-hand accounts provided by descendants of those involved. Lett's recalls, in her "notes about sources," the son of a soldier killed during the war, "I hope you can bring him alive again." Indeed, she did. Kudos to Ms. Letts for writing a fabulous account of the brave rescue of thse beloved horses.

Quill says: The Perfect Horse is a fantastic book for both horse and history buffs - an in-depth look at the real story behind the rescue of Vienna's Lipizzaner stallions.