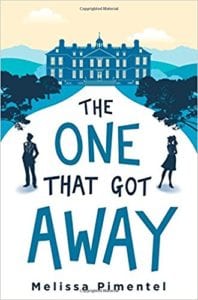 Then. Now. No matter what time frame, one thing remains the same - Ruby has never gotten over Ethan, no matter how she tries to tell herself she has. As a successful New York City businesswoman, avid coffee drinker and workaholic, Ruby thinks she has it all. In her eyes she’s living her dream life, but in truth, it’s a life without love. With one best friend living in New Jersey, her father and stepmother, Candace, who live in Florida, her little sister, Piper, getting married, and no love interest in sight, she hardly realizes her life is lacking. She lives a calm, routine life of work and exercise, but her sister’s upcoming wedding is about to change all that.

Ruby's sister’s wedding is about to put her face-to-face with her ex-boyfriend Ethan. It’s been 10 years since she’s last seen him, after leaving him with simply a letter saying goodbye, and he’s turned into much more than she could have imagined. Bartender turned successful tech millionaire, Ethan’s made a name for himself and a life he loves, one he wishes Ruby was still a part of.

Upon arrival in England, where Piper is getting married, Ruby begins to question and doubt the life she designed for herself and realizes her feelings for Ethan are still strong and alive as ever. It appears, however, that he does not feel the same. Desperate to make things as normal as possible, she tries to show how much his presence doesn’t bother her, which only serves to make multiple situations much more awkward than they need to be. From pushing him to date one of the bridesmaids to making a grand show of not caring that he’s there, it’s clear there is something between the both of them, even ten years later. With her sister getting married to Ethan’s best friend, and being required to spend the entire week with him, Ruby has to try to keep her cool, but as unforeseen events occur, they begin to wonder if life really is too short to hold a grudge.

I absolutely loved this book. As an avid fan of Jane Austen and a lover of Persuasion, I couldn’t help but fall equally in love with this modern retelling. Not only was The One That Got Away able to keep my attention and drag me in at the end of every chapter, but it was also a love story without being overwhelmingly romantic. Many books that go between the past and the present can be confusing, but this was expertly told and clear at every point. Receiving the backstory along with the present not only served to deepen the plot, but it provided such a deep view of the characters that it’s impossible to not become highly attached. I look forward to new works by Pimentel - and I just might have to go back to enjoy her previous books.

Quill says: The One That Got Away is a light-hearted, read-in-one-day kind of a book. Absolutely delightful and enthralling.