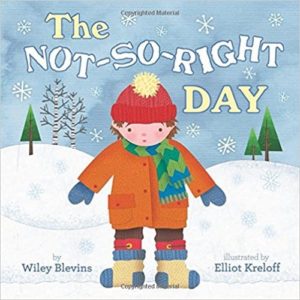 Milo’s little brother Iggy was a different kind of guy, a kind of different that bothered Milo. Everything had to be just so because “Milo liked things in order.” Everything on his shelves were arranged very neatly and when he colored, his crayons were right next to him on his desk. Oh, and Milo colored in the lines. Not so for Iggy. Such a mess you never did see! His shelves were a mess and when he colored his crayons were all over the floor. Oh, and Iggy scribbled. Milo did like things in order, but Iggy just didn’t seem to care.

When Milo washed his hair he did it carefully in the tub. After he was done “he dried his hair and combed it just so.” No, there wasn’t a hair out of place. When Iggy took his bath and washed his hair he just squirted on the shampoo after he brushed his hair. Such a mess you never did see! Milo looked over at Iggy and thought to himself, “That’s not right.” Things never seemed to be right with little brother Iggy. He put his socks over his boots, when he made a sandwich it was a sticky gooey mess, and when he got ready for bed he didn’t use water with that soap. Such a mess you never did see! There was something right about Iggy, but what could it be?

Of course there’s really nothing wrong about Iggy, but big brother Milo just doesn’t seem to see it that way. All children are different and need to learn to realize that not everyone is like them. This is an excellent book in which young children can learn to appreciate those differences in others, including siblings. Individual differences is a key concept that young children need to be aware of and garner respect for others. The artwork is bright, cheerful and will definitely keep little ones turning those pages!

Quill says: This is a charming story about Iggy, a different kind of brother that young children will love.