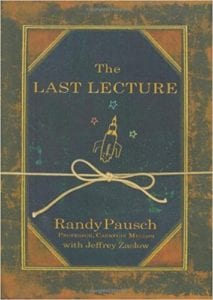 Some of us have been lucky enough to have had teachers who’ve made a difference in our lives. Students who had Carnegie Mellon Professor Randy Pausch, author of The Last Lecture, must have been very lucky indeed. Pausch’s passion for teaching comes through quite clearly in his book, but that wasn’t his purpose in writing this inspirational work. You see, at the time he wrote, Pausch was dying of pancreatic cancer, and this book was Pausch’s way of conveying his insights and leaving a legacy for his three young children, ages five, two, and one.

It is tradition in the academic world for retiring professors to be asked to deliver a last lecture on any topic they choose, but most retiring professors do this after decades of teaching. Pausch, in contrast, retired after his diagnosis at the age of 45 in order to spend as much of his limited time with his wife and children. With this goal in mind, it’s understandable that his wife, Jai, would object to Randy’s saying yes to Carnegie Mellon’s request to give a last lecture, as she felt that any time Randy spent working on the lecture would be precious moments away from her and the kids.

However, in The Last Lecture, Pausch describes how Jai eventually came to accept Randy’s need to do this. The book includes much of the content of the lecture, but it also details the logistics that went into writing the book. Since Pausch’s doctors had told him to continue to exercise in order to maintain his health as long as possible, Randy would take daily bicycle rides, and while doing so, he would wear a cell-phone headset and speak to Wall Street Journal reporter Jeffrey Zaslow, who helped Randy with this writing project.

There are lessons for all of us in The Last Lecture, and Pausch tells them all with candor and humor. I especially enjoyed reading about the day that Randy learned, as a graduate student, that his arrogance was a flaw. One of his mentors took him for a walk and said, “Randy, it’s such a shame that people perceive you as being so arrogant, because it’s going to limit what you’re able to be able to accomplish in life.” Clearly, Pausch’s arrogance fell by the wayside after this, as he was a man who not only accomplished much in his short life, but also mentored others, encouraging them to achieve great things too.

I don’t usually keep my books; instead, I trade them for new reads. However, in this case…

Quill says: This is a book that should be part of your personal library and shared with others.