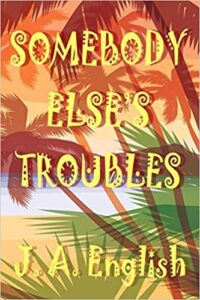 J.A. English delivers a complex story that spotlights the art of reinvention in his debut novel, Somebody Else’s Troubles.

Travers Landeman is thirty-eight years old and has nothing left to keep him tied to his less than stellar life in Ohio. When he decides it’s time to abandon his present life for a newer one, the only matter he didn’t consider is the fact he would become a fugitive. In order to understand how Travers became the proverbial guy who went to the store for a gallon of milk never to be seen again is a bit more complex. He sets his plan in motion and flees to the small Caribbean Island of Mabuhay. Imagine his glee when he meets the likes of Marguerite. She’s somewhat of a patriarch on the island of Mubahay, but let’s not get ahead of ourselves.

The final straw that affirms Traver’s plan to escape his present life is the sudden and shocking death of his teenage nephew, Matthew. It would seem Matthew had been abused by his parish priest for many years and when the situation was too much for Matthew to handle, Uncle Travers isn’t available for his nephew’s final (and urgent) plea for help.

The years pass and Travers is quite settled into his island lifestyle; he gets comfy with a new family. Imagine his surprise when Private Investigator Albert McNab who represents the Atlantis Fidelity Insurance Company plans to bring Travers back to Ohio. There are more than a few loose ends Travers failed to tie up and it’s time for him to atone for the sins from his past.

There are endless moments of shenanigans and characters to comprehend in J. A. English’s debut novel. While this read does not disappoint thanks to a fast-paced storyline and an abundance of adventure, there are times when the complexities of the scenes were too convoluted. Mr. English’s style was to teeter between past and present before weaving the next element into the story. This was tedious, at times, and difficult to connect the dots and continue forward with the plot. I will give Mr. English props for his writing ability; in that his characters are colorful, and the dialogue is interesting. However, the jump between past and present was fragmented, and it was often a struggle to reconnect with the story without having to backtrack and refresh first before moving forward. I’ll end with a word of caution to his audience; this book requires a fair amount of concentration in order to maintain a connection with the plot.

Quill says: Somebody Else’s Troubles sets the notion in motion that one can plan to disappear, but the past inevitably will catch up.