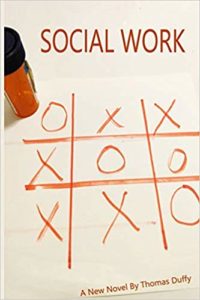 Seasoned novelist Thomas Duffy explores the lives of a social worker, a patient, and the people around them who affect their lives in varied, complex ways in his newest book, Social Work.

Lauren is the social worker, a woman with a solid niche in her profession and an extra talent, an air of positivity that surrounds her and infuses her clients with a wish to follow her example. The latest addition to the hospital group she conducts is a tough customer: Marc tried to kill himself, and wishes he had succeeded. He joins in group and private sessions with Lauren while secretly hoping to get free of the legal restrictions so he can have another try. But there’s something about her approach that begins to affect a turnaround in Marc as it has in others. It isn’t long before he is receiving monthly benefits based on his diagnosis, and has secured a low paying, decent job. And he’s met a woman, Holly, a reality show producer who sees in Marc the kind of unusual personality traits that she’s attracted to. Meanwhile Lauren is also dating; she has connected with Ahmad, who shares her profession and takes a calm, steady careful view of it.

As Marc and Lauren talk one-on-one over the course of several months, they both privately nurse feelings of curiosity and attraction for one another. Lauren sees in Marc a challenging sparkle that is missing in her quietly evolving liaison with Ahmad. Marc clings to Lauren as the only person in his life who tells it like it is and keeps urging him to work, earn, and ultimately prosper. Eventually, they will need to make decisions – about what is best for each, and how to go on growing and progressing.

Duffy’s book is, remarkably, told mostly through conversation. This fits with the nature of his characters’ needs - one a dedicated counselor, the other a conflicted, inventive but lonely soul. As the talks continue, the helper and helping roles are often interchanged, as Marc, despite his needs and hang-ups, has much genuine wisdom to impart, and Lauren, despite her professional demeanor, is seeking the offbeat intuition that he has to share. By means of their mutually therapeutic talks together and with their chosen friends and lovers, the author reveals nuance and depth in a broad range of human relationships. Duffy himself is a social media reviewer who has had contact with notable actors and directors; he adds this dimension to the pursuits of, and discussions among, his protagonists. Their inner circumspection and outer circumstances keep changing in unexpected ways, at a fast clip, making this a compelling read.