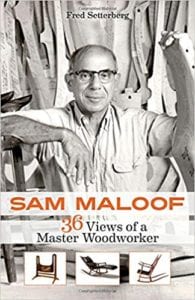 When you hear the word “artist” you tend to think of a musician who changed the scene and altered the minds of a generation; or, a person with a brush who painted famous works that now hang on museum walls. When you hear the word “artisan” you think of the craftsman/woman who owned the mind that could design a work of art from scratch. Then, putting in major hours of work, used their hands to sculpt, nail, glue, saw, polish, etc., to bring that design to life.

For a few, (like this particular reviewer who has the good luck of living with a woodworker who can literally take pieces of junk and transform them into magical pieces of art), the craftsman that this book spotlights is one of the finest ever to wield any tool known to woodworkers. Sam Maloof was a genius in the field of woodworking. He understood definition, from the finely carved lines to the intricate details that make a piece of furniture come alive.

But it was not just his genius for details, or his imaginative work that made Sam Maloof a household name, it was also his kindness and warmth as a human being and friend – as well as a teacher to those who were lucky enough to be able to watch him work – that made him special. People can even feel this artisan’s vibe as they pass by his Southern California compound which once was filled with many artists and artisans who brought about transformations in the world of woodworking, arts and crafts, and more.

In this lovely memoir, six years after Mr. Maloof’s death, chapter after chapter of friends, admirers, and co-workers tell tales of the Sam Maloof most never got to know. Hiram Chodosh (president of Claremont McKenna College) talks about the pure emotion and beauty that Sam Maloof brought to even the simplest pieces of furniture. Jennie Chin, daughter of a man who was the roommate of Sam’s in Los Angeles when they were young and working as graphic designers, shares the more personal layers of the woodworker. And with each new chapter, the reader gets to learn more and more about the dynamic Maloof who was strong-willed, determined, and believed in the beauty of furniture.

In other words, this is a tribute to an amazing man who’s work will never be forgotten, with people coming together to reveal the ‘best of the best’ in the world of woodworking. And a man who had such great passion for his art that he was kind enough to share it with one and all.

Quill says: Fun, lighthearted, beautiful stories, this memoir is one to be savored.