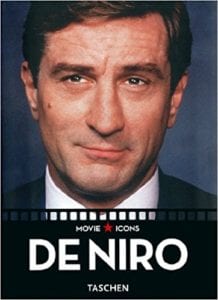 Many people who have seen Robert De Niro in somr of his more recent comedic roles such as Meet the Parents or Meet the Fockers may dub him the quintessential, brash, bold, elder king of comedy, unaware of the versatility of one of the more superlative method actors of our time. James Ursini notes that “Most moviegoers associate Robert De Niro with adjectives like intense, violent, streetwise, and brooding.” (pg. 11) The De Niro aficionado full well knows about his early venture into acting at the tender age of ten, yet the casual fan, who does not delve into biographical tidbits will be able to briefly peer into a dysfunctional childhood home created by a “homosexual father” and an “intellectually distant mother.”

Ursini, who paints De Niro as the “Existential Man,” briefly paints a portrait of the man before the pages swirl into life in this amazing visual photobiography that spans his career from his “fresh faced” early efforts in films such as The Gang That Couldn’t Shoot Straight in 1973 to The Good Shepherd in 2006. The felicitous mixture of black-and-white-art photography and full color shots, interspersed quotations (in English, German, and French), breathes life into this stunning book. Although De Niro has been noted for his “disdain for publicity and his guarded nature,” (pg. 12) but the tasteful, scrupulous selection honors the obvious genius of his work.

De Niro’s colleague, Meryl Streep sensed his need for privacy stating, “Bob has always been very loyal to me, during a really hard time in my life, and I feel I can count on him. But deeply, I don’t know him. He is a very unto-himself person, too.” (pg. 70) In a portrait created for Goodfellas, we see a man whose name is not Robert, but a man who is truly Jimmy Conway. His method acting carries him so totally into a role, one suspects he has become the man he is attempting to portray. De Niro once stated that “One of the things about acting is it allows you to live other people’s lives without having to pay the price.” (pg. 12). If that is the case he is a man who has lived many lives. Sean Connery also noted his intensity stating, “There’s often this tendency with actors when they’re asked to play a villainous part to send little signals to the audience that says ‘I’m not really like this.’ De Niro doesnt’ do that.” (pg. 89) Perhaps that is the mark of a true actor.

The De Niro fan will adore browsing these pages, but the man himself, a man who was known for his “extensive research for each role,” may claim that Ursini missed the mark in his. He states that “In Awakenings (1990) he plays a character who has buried his personality and feelings so completely that he becomes catatonic.” (pg. 12) Unfortunately this representation of the portrayal of the character is incorrect. De Niro created a stunning representation of a man whose catatonia was medical in origin, specifically due to encephalitis and Parkinson's disease, not one who is denying his very essence. Despite this faux pas, this book is well worth reading, even if the likes of Oliver Sacks takes offense at Ursini’s forgivable misstep.

Quill says: This amazing visual photobiography that spans De Niro’s career from his “fresh faced” early efforts in films such as The Gang That Couldn’t Shoot Straight in 1973 to The Good Shepherd in 2006, will thrill all his fans from the die hard aficionado to the casual moviegoer!