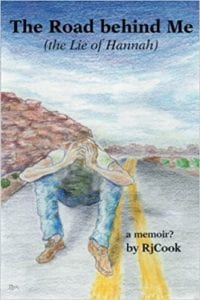 RjCook delivers a melancholy introspection of the ‘love’ who got away in his memoir, The Road Behind Me.

It is the summer of 1974 and Cook is bound for Anaheim, California. Hitchhiking most of the way from his northern New Jersey home to the SoCal Utopia breathes new hope for Cook to process the logic of leaving not one, but two loves lost behind. As Cook writes: “...Mostly, it is a story of unrequited love and the lengths to which a man would go to vanquish the demons of painful memoir...” Cook’s theoretical take on love plays out the premise in terms of the ‘average’ number of times man falls in love with woman. Mind you, he is barely 20 when he embarks on his adventure; yet his personal experiences are grounded for him given his heart has been broken twice at this stage in his life.

Cook sets the stage early on; laying out the complexities of his family—multiple siblings and certainly a large blended family. He touches on the relationship with some of his siblings along with the equally estranged and lack of connection with others. All this is achieved within the first handful of pages before he launches into the meat of his memoir. By the time the reader has reached page 7, Cook redirects the reader back to his teens and the late 60’s. The Viet Nam War is a common household discussion, but one that is ‘tired.’ Enter ‘Shelly,’ the first woman Cook ever ‘...passionately kissed...’ and certainly the first female he ever uttered the words 'I love you' to. However, memories of Shelly are not the recollections of the woman who will haunt him for the next forty years...

I found RjCook’s book to be his homage to the sublime ‘innocence’ of a time that has long-since dissipated in our society. It was a time long before internet and cellular phones and the notion of social media might as well have been the equivalent of taking a trip to Mars. Cook portrays a solid performance of painting a picture of what it meant to have his heart broken. There are several passages of prose that lead the reader on his journey of seeking the cure for his ‘broken heart.’ While his memoir is a brief 115 pages, there are opportunities for the reader to feel the emotional depths of his tumultuous struggles. There is a cathartic tone to this story that resonates Cook’s mission of seeking closure for the obvious demons that haunt him concerning the break up between him and his beloved ‘Hannah.’ Cook is generous with his inner thoughts and treats the reader to an abundance of relatable circumstances. By crafting his memoir this way, in my opinion, Cook demonstrated he had a clear vision of the audience to whom he was writing.

Quill says: The Road Behind Me affirms that life can go on even when the heart is oft a heavy load to endure.

For more information on The Road Behind Me: The Lie of Hannah, please visit the website: www.horriblerealityland.com/road