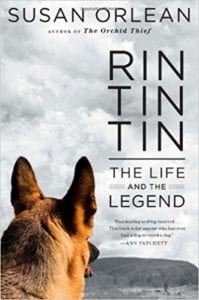 He was the canine star that all future Hollywood dogs would be compared to – he commanded a higher salary than his trainer and even his human costars, and his legend continued to grow long after he had passed away. He was Rin Tin Tin.

In this exhaustively researched memoir, author Susan Orlean takes the reader on a journey from the battlefields of World War I to Hollywood and beyond as she explores the life of Rin Tin Tin and his trainer/owner/best friend Lee Duncan. After recounting Duncan’s early life, and the dogs that helped him through some rather difficult times, the author moves to the countryside of France. It was here, in September of 1918, where Corporal Lee Duncan found a German shepherd and her pups in a bombed out kennel. Rescuing the animals, Duncan kept the two pups he felt were the pick of the litter, a male and a female, and gave the others to members of his squad. Naming his two dogs after two popular good-luck charms found in France, dolls named Nanette and Rin Tin Tin, Duncan managed to keep the animals until the war ended and then, with a bit of difficulty, ship them home to the States when the war ended.

The trip home was long and unfortunately, Nanette fell ill. Upon their arrival in the States, she was kept with a knowledgeable breeder but the dog was too sick to recover. Duncan was down to one dog but that German shepherd would become the biggest canine movie star to ever hit Hollywood. Through a series of events that included Rin Tin Tin being filmed jumping an eleven and a half foot wall at a dog show, during a “working dog” jump-off, the dog, and his owner, found their way into Hollywood.

It was the early years of Hollywood when Rin Tin Tin made his entrance, during the era of silent films. In those early movies, he saved the damsel in distress, the family farm, the hero from a pack of wolves, caught the bad guy(s), jumped ravines and even climbed up and down a tree (and this was before the days of special effects!). Rin Tin Tin did it all and more importantly, he did it with a myriad of expressions that conveyed emotions not normally attributed to dogs.

This book doesn’t just cover the first Rin Tin Tin but rather, all the dogs that bore the title, from Rin Tin Tin Jr. (that Duncan confessed to not liking much) to Rin Tin Tin IV, the star of the hugely successful 50s television series, The Adventures of Rin Tin Tin, and beyond.

Using Duncan’s own unfinished memoir, as well as source materials, the author has brought this amazing dog and his story back to life. The first 100 pages that deal with Duncan and his times with the original dog were quite interesting. The reading is crisp and clean, with background thrown in here and there on WWI, the development of the German shepherd, the early movie industry, and various individuals who worked with Rin Tin Tin and/or Duncan. There’s just enough of this material to provide insight without bogging down the story with minutia. However, once the text moves on to Rin Tin Tin Jr. and the dogs that came after him, unless you have an undying curiosity about these animals, you may find your thoughts wandering (and this is well over half the book). The text focuses more on Lee Duncan, the studios, the television series, and the life of Bert Leonard, the producer of the television show (for example, the author talks about the storage unit he kept, and about storage units in general). The author also tends to insert herself, and her opinions, into the story on occasion – something that didn’t belong in this book.

Quill says: An entertaining and very informative memoir about a Hollywood icon, although the latter half of the book might be a bit dull for those not obsessed with everything related to Rin Tin Tin’s successors.