ReBecoming: The Way of Opportunity 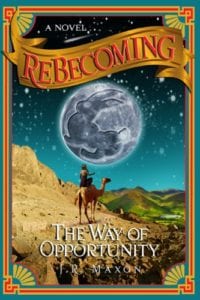 ReBecoming: The Way of Opportunity

With the ever growing mound of self-help books in the world, it is good to know that there are some who dispense advise with a dose of fun. Rebecoming by J.R. Maxon is just that, an entertaining adventure/love story with a side serving of affirmative motivation messages. J.R. Maxon offers the usual healthy dose of positive karma seen in self-improvement books, but adds a twist. Instead of listing the tried and true staid reasons describing why positive thinking benefits us, Maxon has incorporated the message into a playful and compelling tale of friendship and growth.

Best friends, Andrea and Diana breeze through life self-absorbed and petty. Andrea has had more superficial relationships than Cher has had plastic surgery, yet finds it difficult to understand why abusive men don’t translate into good partner material. Though Diana is more grounded than her dear friend, we get a troubling glimpse into Diana’s character when, early in the book, a woman at the gym confides to Diana that she is afraid to go home to her drunk and abusive husband . Diana's response is to play aloof:

"I’d never been married and was a little unsympathetic. ‘Well, I don’t have any advice for you.’ I stated with a sterner voice than I’d intended as I moved toward the locker door."

Enter into the picture, Jon, the gym trainer/guru who will transform Diana’s consciousness, and teach her how to empathize with others and develop spiritually. The book unfolds slowly and does not force its doctrine down the reader’s throat, rather it graciously weaves its message in and out of the story line. The primary philosophy extolled by Rebecoming is the importance of helping others and looking beyond one’s ego. The story renders its message in a straightforward manner with dialogue such as, "Will this bring peace into my life, or will it lessen the peace I already have?" The author also emphasizes the importance of taking responsibility, forgiving oneself for missteps, and moving on.

The narrative moves along swiftly as the reader becomes embroiled in the various friendships between Diana and Andrea, Diana and her boss, and Diana and Jon, the latter fraught with physical tension. There are also some vivid fantasies that serve to foreshadow events, however, I must admit my favorite one was about chocolate and had little to do with the story.

Thanks to Jon’s teachings we see Diana mature and open up to new experiences. Though Jon is somewhat mysterious and unflappable, we come to see him more sympathetically as the story line continues. The only chapter I found to be confusing was at the end of the novel when Diana becomes victim to a man presented only briefly in an earlier chapter. Although I understand why the author wrote the scene, it didn’t feel as satisfying or well thought out.

Overall, this is an easy and worthwhile read. The message is clear and contagious, and the focus on both spiritual and physical improvement is refreshing. Despite some minor flaws, you’ve got to love a woman who fantasizes about chocolate.

Quill says: An enjoyable novel about learning to become a healthier person, both physically and spiritually.

For more information on ReBecoming: The Way of Opportunity, please visit the book's website at: ReBecomingBook.com