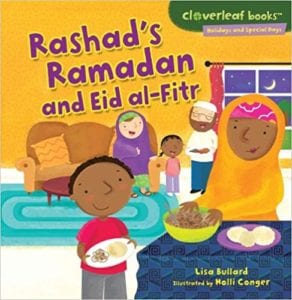 Rashad smiled as he pointed and looked up into the starry sky. He was the first one in the family to spot the Ramadan moon. It was a special time of year that he was looking forward to it. He was Muslim and "Ramadan is the ninth month in the year used for Muslim holidays. Rashad's father's smile was as big as his son's as they knelt on the lawn to look up at the new crescent moon. Islam was their religion and it was time for celebration because the day after the Ramadan moon arrived it would be time to think about Allah, to fast, and to help out poor people. Rashad would learn about many things, including Muhammad, mosques, and the Koran.

Rashad's mother lovingly stroked his head and tucked him into bed under his red bedspread with the bright yellow stars that night. Because the "calendar for Muslim holidays follows the first moon," that meant that he'd have to be on the alert to be the first to see it every year. The next morning the family was up before sunrise to eat their breakfast. During the month of Ramadan people "fast between the hours of sunrise and sunset." Little kids like his sister and sick people didn't have to, but Rashad was now old enough to fast. It was an exciting time, a time to become close to Allah. He would watch for the moon and soon it would be time for Eid al-Fitr!

I loved the gentle, excited flow of the book as Rashad talked about one of his favorite times of the year. Rashad, as well as other children who are learning about their religious heritage from books, will start to understand the origins of certain customs and rituals surrounding holidays such as Ramadan and Eid al-Fitr. There are numerous informative sidebars gracing these pages that give specific information about several Islamic customs. For example, in one we learn about the way people dress: "Many Muslims cover certain parts of their bodies in public. They dress this way to show respect to Allah." In the back of the book is an index, a glossary, an activity (Make a Moon Can) and additional recommended book and website resources to explore.

Quill says: This is an excellent overview of Ramadan told from a child's point of view.