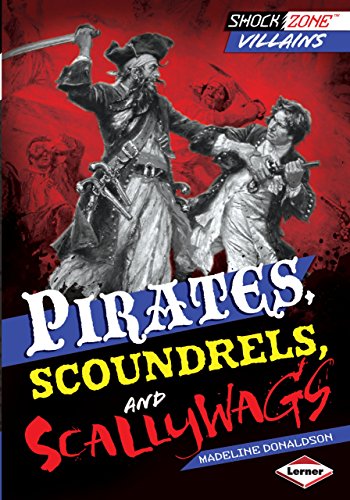 Pirates are nothing new. In fact Viking pirates, “the evil of the north,” were at it hundreds of years ago. One of the more “famous targets was the abbey at Holy Isle in northeastern England.” Their raid got them all kinds of valuables and unfortunately, many monks died. These feared and fearless pirates were the scourge of their time. Perhaps you’ve seen Johnny Depp in Pirates of the Caribbean. Many believe that his character, Captain Jack Sparrow, just might have been Bartholomew Roberts. He wasn’t always a pirate, but once he became one he seemed to have a knack for it. One of his first ventures netted him “forty thousand gold coins and jewels.” Roberts was hooked on a life of piracy.

Some pirates had a very unique style of attack. Edward Teach, more commonly known as Blackbeard, “threaded his hairy locks with twine” just before attacking. He’d set the twine on fire and it would burn slowly. Blackbeard was some kind of brute and “one scary dude.” He attracted a lot of attention, including some he didn’t want. The British took note of his activities and went after him. You’ll read about Blackbeard’s sorry end and it wasn’t pretty. There were a lot of pirates on the high seas, but not all of them were men. You may have seen a female pirate in Pirates of the Caribbean as well.

Chen I Sao was a pirate in the South China Sea and his wife was Shih Yang. Mind you, this dynamic duo were good at what they did and had a fleet of “four hundred ships and seventy thousand sailors.” That was a low estimate, but no one wanted to mess with them because “execution was one of the possible punishments for disobeying an order and for stealing or hiding plunder.” There were and are plenty of dastardly pirates. In this book you’ll read about the Barbarossa Brothers, François L’Olonnnais, Henry Avery, Stede Bonnet, Edward Low, Jack & Anne & Mary, and some modern-day pirates.

This is an action-packed look at pirates from the Vikings to those who still roam the seas. Movies have depicted some of these characters as daring, exiting people, but in reality they could be brutal. This book doesn’t hold the punches and the young reader will hear all about some of the shocking things they did. The layout is vibrant with photographs, art reproductions, and numerous informative sidebars. For example, some small sidebars define unusual words such as gibbet and pillage. Even the most reluctant reader will be drawn quickly into learning about pirates. In the back of the book is an index, a section describing “What Every Pirate Needs,” and additional recommended book and website resources to explore.

Quill says: If you have a youngster who loves reading about “shocking” characters is history, you might want to check out the Shockzone “Villains” series!