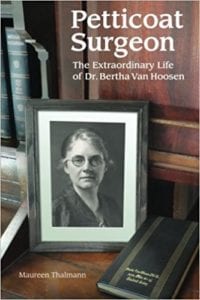 Throughout history there have been many people who dedicated their lives to something great and because of that we are able to see how the past has shaped the present. In the area of medicine there was a specific woman named Dr. Bertha Van Hoosen who gave her life to this field in the early 1900’s. This was a time when women faced intense discrimination and numerous obstacles when trying to enter the medical field. From growing up on her family’s farm to becoming one of the most well known surgeons of her time, Dr. Bertha Van Hoosen conquered every challenge in her path to follow a lifelong dream.

At an early age Bertha showed a particular interest in medicine and health especially concerning the animals on the farm which were her only “patients” at the time. Fortunately Bertha grew up in a home where every child was expected to gain an education that included going to college. When Bertha and her sister Alice were ready to work toward a higher education the main career for women was teaching, but both of these women had their eyes on quite different careers. Bertha of course had her eye on medical school and was determined to do whatever it took to make this possible. The first step was to save the money to actually attend school so for a time Bertha did numerous jobs until she had enough saved up for the first semester and her journey began.

The intense happiness of being accepted was short lived as Bertha found that the discrimination against women was even worse inside the medical school and it was difficult for her to find anyone who would allow her to gain experience. However, Bertha was fortunate enough to find a handful of women doctors that had come before her who knew the hardships she was facing and helped her see that it was possible to push through these challenges and succeed. It was not long into medical school before Bertha found that she was developing a particular interest in being a surgeon and so began the next step in her journey and this decision would lead to places that she never would have thought possible.

There were so many aspects of this book that I immensely enjoyed as the author, Maureen Thalmann, put it together in a way that truly showed what an accomplishment it was for Dr. Bertha Van Hoosen to do everything that she did. It was unbelievable to read about what she had to go through to get into medical school, the challenges during medical school, and then the time it took to establish a practice after graduating. In addition, I was intrigued reading about how medicine has developed and changed since Bertha's time. I think today we take for granted many of the medical advances that we have available and to see what it was like for those living in the early 1900's was a real eye-opener.

Quill says: An absolutely incredible story of an inspiring individual.