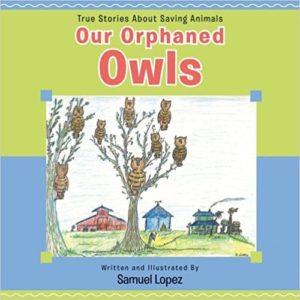 Farmer Samuel Lopez and his wife Cheri lived in a century old farmhouse. Year after year a pair of owls chose to nest in a nearby eucalyptus tree. The joy of new life is always exciting and the couples, human and animal alike, enjoyed watching the “tiny owlets” grow into “soaring, swooping juvenile birds.” During the sixth year the Lopez family welcomed a new family, but something was amiss in the air. The weather began to change and a storm began to brew. The storm lasted for many days and even the “hundred-and-twenty-year-old” eucalyptus tree was not able to protect one member of the owl family. Mr. Owl continued to bring food to his two owlets, but Mrs. Owl had disappeared.

Mr. Owl could bring the food, but he probably didn’t have the know-how that would enable him to raise his little family. The nest was soon abandoned and Cheri’s mothering instincts kicked in and she took the little owlets under her figurative wings and into her home. She dried them off and began to feed them. The smallest owlet, who probably had very little chance for survival, “might never have the chance to experience life on the hundred-year-old farm.” The human parents began to nurse the baby owlets and fed them a diet that mimicked that which their own parents would have provided. Would their efforts prove useful or would the babies end up in a “backyard pet cemetery?”

I let this book languish on my desk for a few days and didn’t even crack the cover, but once I did I was very interested in the story of the little owlets. Had one of the photographs on the inside pages been on the cover, I would have immediately been browsing its pages. The photographs are very appealing and make the reader want to give the old woot-woot cheer in hopes that the babies would survive. The story is charming and pulled me along quite quickly to find out just what happened at the Compassionate Pet Sanctuary where apparently many lost animal souls found a haven. The story would be a nice read and discuss story during circle or story time in a homeschool or classroom setting.