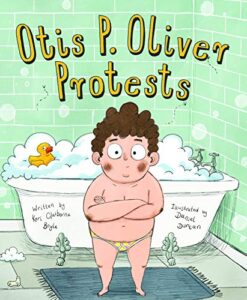 Well just imagine a little boy, doing little boy things all day long...digging in the dirt, playing with worms and his dog...Now imagine he hates baths! The odors almost float off the pages of Otis P. Oliver Protests and make you want to plug your nose!

Young Otis is the star of this compromising (in more ways than one!) children’s book, who simply decides he is done taking baths. As the youngest of four children, with three older sisters, you might guess his opinion isn’t favored and his decision is not taken lightly. The dog only gets one bath a month, so why should Otis need four a week? He decides to rally up the neighborhood kids and demand his voice be heard.

“The only thing we have to fear is soap itself,” becomes his platform and the kids march the streets in peaceful protest of bath-time everywhere, signs and all, saying “Join the anti-tub club” and “Occupy dirt!” While this silly story will elicit plenty of giggles, it has an important message to convey as well. There is power in numbers, an art to compromise and reasonable negotiations can help you achieve your goals.

Daniel Duncan does a wonderful job of creating unique and memorable characters for this stinky story. The facial expressions of each one, including the family dog are amusingly accurate.

Quill says: Otis P. Oliver Protests teaches you to stand up for what you believe in, even if that’s a dirty job!