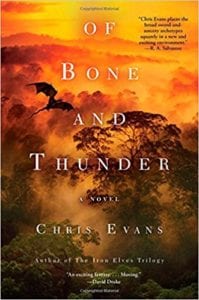 In the midst of a devastating war set in a thick jungle, with suffocating humidity, and mist covered mountains, an unseen evil is taking shape that threatens to disable an entire army. Author Chris Evans weaves together the lives of many people who find themselves in this war fighting to stay alive. There are some who see the war as a chance to achieve glory and honor - they long to be like the war heroes they hear about in stories. One such individual is Thaum Jawn Ratium. However, as the harsh realities of war hit him square in the face Jawn begins to realize that the most important thing is not to achieve glory but to find what you can do to keep the people you care about safe. On the other end of the spectrum, right there on the front lines is a soldier named Carny who, even though he knows his role in this war, continually questions the reason for the fighting.

Then battling from the air on the back of a rag, the giant winged beasts that resemble dragons, a man named Vorly Astol leads a group of riders through the perilous fighting in the sky. For years it had just been Vorly and his rag Carduus but now he finds himself forced to make a relationship with a recent graduate from the Royal Academy of Thaumology named Breeze. It has become clear that Thaumatics is here to stay and even though Vorly does not like the change he can see the advantage of being able to communicate with every other rider as they are flying over the battlefield. Each of these individuals posses different skills and different reasons for being there, but they all will realize that the reason to fight is not glory but rather the person standing next to them.

The twists and turns and interweaving of the characters in this story was truly amazing and I applaud Chris Evans for bringing such a story to life in such an appealing way. It is fantastic when a book continues to reveal the small details that connect different characters and how that transforms the story from one chapter to the other. That is exactly what Chris Evans did and as soon as I got started on this book it was extremely difficult to put it down until I reached the end. As the relationships were built in this story it was fun as a reader to see the characters who at one time seemed to have such a hard shell show a softer side as they slowly revealed how they felt about the people they had around them and the importance of their safety and well being. One of the best relationships in the book for me was the one between Vorly and his rag Carduus. Vorly did not see Carduus as just a beast but as his partner, a partner he respected. From beginning to end I enjoyed every chapter of this book as it took me on a wonderful roller coaster ride that can only come from a great adventure-fantasy book.