No Baths at Camp 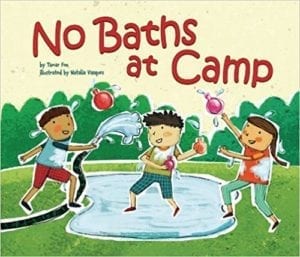 No Baths at Camp

Max scowled and folded his arms in front of him as his mother pointed to the tub. No way he wanted to get in it. The bubbles threatened to go over the top and onto the floor. Bathtime was no fun, no fun at all. Max wanted to go back to camp because, he claimed, “There are no baths at camp!” His mother was surprised so he began to tell her all about the things they did at camp. Up, up, up they went climbing on the “Rock Climbing Wall.” They put chalk on their hands and up they went and when they reached the top he told her they would “ring a bell and put our handprints on the wall.” There were no baths on Sunday.

Tuesdays brought drama and face paint, Wednesdays they built a fire and roasted marshmallows. There were no baths on Tuesdays and Wednesdays because “there are no baths at camp!” The week went along and the fun continued. They canoed, swam, painted, had water balloon fights, but what they didn’t have were baths. On Friday they learned “Israeli dances on the big field.” The children twirled around in a circle, their bare toes digging in the grass and mud. Friday afternoon the children began to clean and hang up their posters that said, “Shabbat Shalom.” Were there really “no baths at camp?”

This is the fun tale of Max, a boy who didn’t care much for baths. Naturally, Max saw plenty of water at camp, but getting wet simply didn’t count as a bath. The tale recounts each day of the week as the children have fun at camp and get quite dirty in the process. The artwork is simple, but very appealing with the bright, shiny faces of the children. While some children love baths when they are little, the fun wears off quickly as they get older. Max’s aversion to water, least ways of the bath persuasion, is amusing. His insistence that there are “no baths at camp” didn’t quite ring true with his mother. If you have a youngster who’d enjoy a camp tale with no baths allowed, you might want to put this one on your list!

Quill says: A lot of dirt and a sprinkling of water give this "no baths at camp" tale the fun factor that children enjoy!