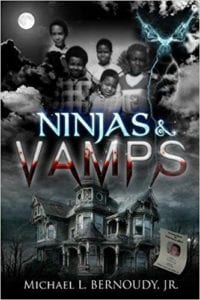 A move from the inner city to the backwoods of Arkansas forms the backdrop for a very unique and interesting story penned by author Michael L. Bernoudy.

Antonio Anderson (Tony or "T" to his friends) lived in South Central L.A. with his father Winchester. There's no mother in this tale, as she left when Tony was three years old. His father, however, always had a woman by his side, some good (one was a great cook), some a little less noteworthy. This was the life Tony was used to, and all went along as expected until Tony's grandmother became ill. Father and son soon had to pack up their lives and move cross-country to Lewisville, Arkansas to care for the ailing woman.

Nothing could be more of a culture shock for a young man used to the streets of South Central than moving over 1500 miles to a tiny, sleepy town in Arkansas. As Tony settled into his new life, it quickly became apparent that he had a lot to learn about life in a small town.

Tony's Arkansas family was an interesting bunch, especially his aunt Bebe and cousin Opal. Both women taught at Tony's school so there was no escaping his relatives. The teen described Opal as "creepy" with her fixation on supernatural beings from Africa, especially the African vampire. Meanwhile, Bebe was in charge of Tony's gym class and she was a taskmaster who pushed her nephew harder than any of her other students. Still, while there were some things that made life in the small town hard for Tony, he did make the football team and soon settled into life in Lewisville, thanks to some new friends that helped him adjust.

Just as things seemed to be going well for Tony, while attending a party along with lots of other kids from the high school, a white girl was attacked. That attack ended the party, but it also started a rash of disappearances of white girls in the town. Something was going on, and that "something" would soon drag Tony, his good friends, and "creepy" Opal and "taskmaster" Bebe into the fight of their lives.

I wasn't sure what to expect when I began reading Ninjas & Vamps as the back cover implied something was going on in the small town Tony was moving to - but what? My curiosity was piqued and I admit that the unexpected twists in the story took me by surprise. Action, suspense, and likeable characters that the author carefully developed made the story enjoyable. In the Forward, the author warns that he switches from "...my narrator voice to my homeboy voice, [so] don't get too frustrated." This switch back and forth was part of what made the story real and enjoyable. The one downfall to Ninjas & Vamps is that there are numerous editorial errors that frequently interrupted the flow of the story. With a careful re-edit, this story could really take off.

Quill says: Ninjas & Vamps has a lot of potential, and with a careful review by an editor, it could be a really fantastic story.

For more information on Ninjas & Vamps, please visit the author's website at: www.mikebernoudy.com