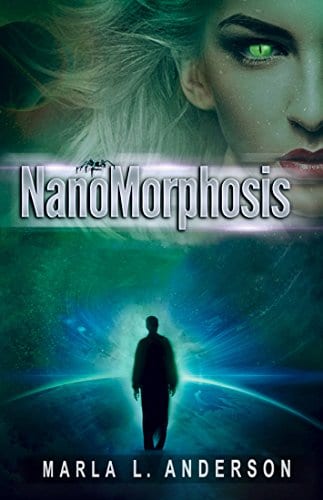 NanoMorphosis takes the reader to a futuristic world where everyone knows that the time for sustainable life on Earth is coming to an end. It is seen in every aspect of normal life as people try to go through their daily tasks. Natural resources are disappearing and there is a terrible disease spreading through the country that causes human skin to decay, giving the disease carriers the look of a toad. Both Daniel Walker and Cadmon Dhyre are acutely aware of these problems, but have two completely different solutions they believe would save mankind.

On one hand, Daniel Walker believes the only hope for the human race is to find another planet similar to Earth in deep space. His belief in this idea runs deep, for his parents and their crew were killed by an alien race called the Garuda, while attempting to find a new planet. Just a boy at the time, Daniel was a witness to his family’s gruesome deaths, and only survived after finding safety in a small pod until a rescue ship was sent for him. The nightmares of that day still haunt him and fuel his determination to complete his parents mission - whatever the cost.

In contrast, Cadmon Dhyre has a very different solution to Earth’s problems.  The reason? He is one of the unfortunate victims who has been infected by the T-nanogen virus; he is a toad. It was only his brilliant scientific understanding of genetics, molecular biology, and artificial intelligence that allowed him to work at a university. There he worked tirelessly to find a way to genetically reverse this terrible disease, but unfortunately his experiments up to this point had all failed. Then after being denied a job for the Allied Coalition for Exploration of Space, Cadmon takes a turn for the worst. He feels abandoned by his fellow humans because of a disease he has no control over, and didn’t ask for. So, he decides to do experiments completely under the radar, and discovers exactly what is possible with artificial intelligence, but it may change the definition of a human being forever...

At the beginning of this book I felt as if it was going to fall into the typical story of alien life on another planet. However, I was pleasantly surprised that the story quickly emerged into a tale with a unique storyline that I found quite exciting. The characters were fully developed and the author also introduced us to their past, which highlighted the reason for their beliefs as adults. This then added an intriguing psychiatric element to a science fiction thriller. NanoMorphosis reaches into the imagination and brings to life things I had not fathomed yet, which made it so much fun to read.

Quill says: A story of alien life with an exciting, unexpected twist.

For more information on NanoMorphosis, please visit the author's website at: www.mlandersonauthor.com