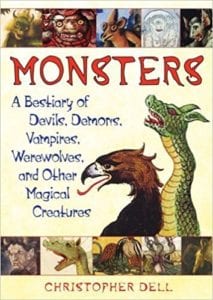 Wowie-zowie! Ya love things that creep in the night? Creatures that fly through the air with mighty shrieks? Furry critters with fangs and claws dripping with blood? This is the big book of monsters for little kids and big kids and everyone in between. It’s a treasure-trove of fantastic art showing fantastic creatures from all around the world and from all cultures—from ancient Egypt, Mesopotamia, and China all the way up to Frankenstein, Big Foot, and Pablo Picasso.

We’ve always loved monsters, says art historian Christopher Dell. “One reason is that monsters answer to a sense of the supernatural that lies deep within us...Even when monsters are described in words,” he adds, “it is their appearance that matters most—the number of heads or eyes, the spikiness of the tail, the sharpness of the fangs. As this book shows, artists have always loved depicting monsters.” (pg. 7)

The first eight chapters of Monsters introduce gods and monsters, devils and demons, magical monsters, dragons and flying monsters, water monsters, transformation and hybrids, ghosts and ghouls, and monsters of folklore. “From the earliest times, it has been difficult to distinguish between gods and monsters,” Dell writes. Both are “supernatural, existing beyond the realms of day-to-day experience, and both demand and inspire fear.” (pg. 12) Chapter 9 tells us how to fight monsters (with mythological heroes as examples of courage and fortitude). Chapter 10 takes us “off the edge of the map,” with “natural histories,” “monstrous peoples” (like races with heads in their chests), and “cryptids” (critters like Bigfoot and the Yeti, which may or may not exist), all the way to “the final frontier.” Each topic is introduced by a page or two of text. In his introduction to devils and demons, for example, Dell writes, “Looking at the sheer inventiveness that has gone into depicting these monsters, one cannot help but suspect that medieval masons rather enjoyed carving them.” (pg. 32) Then comes the art. It’s glorious—every page is printed in full color. Unfortunately, the illustrations lack captions, though the end of each section gives a page listing of art, artist, periods, and location. It would also be useful if the book included an index of artists and works of art.

What’s your pleasure? As soon as you open the book, there’s a Cyclops that appears to be picking its teeth. There are frescoes and bas reliefs, paintings and etchings. In one, a monster is using Martin Luther’s head as a bagpipe, in another we see mischievous foxes playing pranks on innocent Japanese people, another a painting from 1886 shows a dinosaur munching on the top story of a city building. There are also, of course, examples from Bosch and Breugel and Goya as well as art from Tibet and China and Sri Lanka.

Quill says: Is this book nightmare alley or an art exhibition? It’s both, and it’s enormous fun. You’ll never see so many monsters in one place. (Which may be a good thing.)