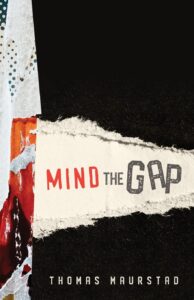 Thomas Maurstad’s novel, Mind the Gap, is not a moment too soon when it comes to its relevance of the modern times society currently navigates.

Justin Mayhaps is a marketer extraordinaire with his advertising knowledge and expertise. It’s the perfect escape where he can lose himself to his work as he wrestles with his day-to-day chore of living beyond the tragic death of his wife. He doesn’t have to leave the confines and comfort of his home in order to perfect his web-based presence as a marketing guru, but his ever-present grief refuses to dissipate. Justin had an enviable daily commute that consisted of "...five steps, a slanting left turn, four more steps and two quick right runs later, he was taking a can of Red Bull from the refrigerator. An about-face, left turn, and four steps, and he sat down at the round plastic-veneer-and compressed-wood table on which his sleeping laptop sat. His commute to work complete..." TheCartoonJungle.com, was his first solo venture beyond the confines of his former job at the ad agency. He vaulted himself to the self-made prophesy of a branding consultant who was for hire for any company interested in having him spin their product from hay to gold. There was a movement happening. eXit was anti-establishment everything and while Justin didn’t know it at the time, he would soon be at the center of where the movement was going next.

Ellis Presley is a musician-video artist on the precipice of indie fame. Trauma was her constant companion growing up and never a day goes by that she doesn’t feel the hole in her heart it left in its wake. Ellis loathed her father. Although he was a successful Texas oil tycoon and left everything to his only child, Ellis, he was also a career alcoholic. The only lasting memory that often haunts Ellis’ memory is the day she crossed the forbidden threshold into his office and witnessed his slumped and quite dead body at his desk. Not only did his suicide leave a permanent and indelible mark on her psyche, but it wasn’t far beyond that when her mother checked out due to a psychotic break from the occurrence. It wasn’t long thereafter that she was checked into the assisted living convalescent home that she would not only never leave but would slip away a little more each day in recognizing who her only child was. How profound that the movement branded eXit would essentially join both Justin’s and Ellis’ chance meeting and the moral to this story was just beginning.

Thomas Maurstad is intentional and stays true to the premise of this novel. There is an obvious anchor set early on that focuses on a multitude of nuances toward a ‘them and us’ premise, i.e., ‘the establishment’ vs. the ‘anti-establishment.’ There is a wide array of passages to choose from to support this observation. One that comes to mind and appears within the first handful of pages: "The protest looked like a mash-up of a refugee camp and a Boy Scout jamboree. The number of new-looking tents suggested that REI had more than met this quarter’s sales projections, sprawl of bright colors and fresh nylon snapping in the breeze like a ground-bound flock of kites. People milled not so much aimlessly as offhandedly, no militarized patters, no marching-band choreography. Many held signs, laser-printed or hand-painted with that day’s chorus of absurdo-political slogans—‘Honk if You’re Homeless,’ ‘Good News, the Rich are Gluten-Free,’ ‘If you Don’t Own a Jet, You Should be Holding this Sign Not Reading It..." I enjoyed the style and layout of the author's tennis-match style from chapter to chapter that volleyed back and forth between his two main characters, Justin Mayhaps and Ellis Presley. Maurstad is purposeful when selecting from his palette of colors in breathing life and believability not only into their respective personas, but he is proficient in breaking up his scenes with credible dialogue. There is a lot going on in the initial set up of this read and the risk of a slight disconnect is present. However, I say to the reader, forge on, because the story does take off and there is a lot to relate to with the adventure that unfolds across the pages once the reader settles in.

Quill says: Mind the Gap is more than a catchy title to a great read, it’s a sublime message to the reader in many ways to ‘pay attention’ to what’s going on around you.