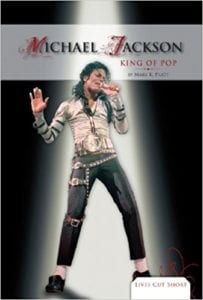 By 1983 Michael Jackson had "launched a solo career, and his star was rising to new heights." It hadn't been easy to break away from a family that had essentially made his career, but this was different. It was his time to shine. He agreed to a reunion concert with his brothers, but when the Jackson 5 completed their performance, he was once again alone on that stage. He sported a sequined glove on his left hand, his sequined socks were visible above his shoes... Michael put on his black fedora and began to dance. It was a dance that would dazzle his audience, quickly bringing them to their feet. It was a dance that was out of this world...it was the moondance.

Michael's childhood as the seventh child in a large family wouldn't prove to be easy. A sensitive child, it was difficult for him to be cloistered in a home where physical and mental abuse was dished out on a regular basis. His father Joe "kept his children from playing with other children in the neighborhood, and he did not allow them to hang out with friends outside of school." (p. 18) It wasn't long before the musical talents of his sons became evident and talent contests and performances in some rather "seedy" joints exposed the boys to things they shouldn't have seen. Their raw talent quickly caught the attention of people who could help them. The influence of Gladys Knight and the Pips would help launch them into stardom.

They had a record contract, one that could be broken. Motown moguls listened to them without comment, but when Berry Gordy spoke, he prophetically spoke of the future. "Your first record will be a number one, your second record will be a number one, and so will your third record." (p. 36) With those words history was made. In this book you will learn about how Michael broke away from the family's clutches, their religion, you'll learn about a lonesome, frightened young man, you'll see photographs of his "ever-changing appearance," you'll hear about the cruel talk ("Wacko Jacko"), you'll learn about his unpredictable, often controversial behavior, the molestation charges, his relation with Lisa Presley, you'll learn about his children, and much more. Did you know there were allegations that he was not the biological father of his three children? Did you know there was talk of a mysterious fourth child? If not, you'll just have to read this book to find out!

This is a fascinating book that will surprise even the most die-hard fan with its surprising revelations. Perhaps many who read everything and anything "Michael Jackson" could tell the author of this book a few tidbits, but those who casually read about him may be quite surprised. The book is quite up to date and without becoming a spoiler gives the latest scoop on the "mysterious" fourth child. I liked the balance of the book and there were enough photographs to pique any young fan's interest. There are many informative sidebars scattered throughout the book that add interesting vignettes like all the names and birth dates of the Jackson siblings. In the back of the book is a timeline, some "Quick Facts," an index, a glossary, extensive source notes and additional book and website resources (via the publisher's website).

Quill says: While the book may not offer anything new for the die-hard Michael Jackson fan, it is a good overview for those who may not have followed his every move.