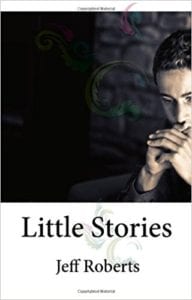 Jeff Roberts has accomplished a remarkable feat with his first book, Little Stories, a series of well written vignettes that focus on love, loss, and the eternal quest to belong.

In The Letter we are introduced to Steve Hawkins, a college student who skips classes in favor of drinking in a local bar. After losing his savings on a pool hall bet, Hawkins turns a new leaf and redeems himself by delving into his studies. At the end of the story he is rewarded with a check from his parents who believe him to be a dedicated student. In an ironic twist, Hawkins gleefully accepts the cash and makes the first of many unwitting choices. Roberts’ writing is sparse yet honest, such as when he meditates on the skill it takes to win at a pool game, “He shot pool as if he were locked in an intimate slow dance with a woman, pacing the table with a steel-eye glare, every shot smooth and assured.” Brief as the story may be, the reader gets a complete and satisfying picture of Hawkins, flaws and all.

Because the author has only a limited amount of time to draw in the reader, the short story is a difficult genre to pull off. Despite this, Roberts uses the short story form to his advantage, most notably in Kisses. Kisses recalls a series of brief recollections between Roberts’ and his mother, some difficult, some mundane. These reflections add up to a moving portrayal in which the author comes to the realization that he doesn’t know his mother that well; that he has only seen their relationship through the eyes of a child. This awareness is heightened when his mother recalls a crisis that occurred in her adolescence - an episode that clearly has had a profound effect on her life. For the first time the author sees his mother as an individual with dashed hopes of her own, causing him to further reflect on his relationship to his children.

In a less satisfying story, Wayne Stevens makes his appearance in Most Likely to Succeed as a young play-it-by the rules adolescent, a straight A student, from a perfect nuclear family, bound for achievement, until he enters a bar and finds alcohol. Using a similar technique as the one Roberts engaged in Kisses, this story quickly summarizes Stevens’ life from adolescence to age forty. Now in mid-life, we find Stevens nursing a hangover while making arrangements to meet up with a prostitute. But when the prostitute arrives, Stevens abruptly rejects sex after a trivial comment is made. Though the disappointment and self-loathing Stevens feels is evident, it isn’t clear why he aggressively throws the prostitute out of his room. Roberts’ ends the story, not with the main character, but with the distraught prostitute in the process of scheduling her next client.

Relativity, a story of love gone wrong, has a strong narrative line that draws the reader in, but is occasionally marred by stilted dialogue. When Sandy asks her boyfriend Jeff for permission to see her ex-boyfriend for drinks, he responds “Well sure, go with my blessings. We both need a clean slate. I want you to be as comfortable with your past as you are with our future.” That type of dialogue feels too contrived for the situation, and recurring lines such as these weigh heavily on an otherwise absorbing story. The opposite holds true of Valentine’s Day 2005, a story that is so riveting and authentic that, if you haven’t lost your job by now, after reading this story you will know exactly what to expect. The tone and the dialogue strike the perfect discordant chord. Despite the fact that the main character is facing the unknown, this is one of the few stories to conclude on a hopeful note.

The predominant themes in Little Stories concern themselves with relationships gone awry, and the loneliness that fills the void. Roberts successfully takes us along this daunting journey with his very capable writing skills.Little Stories offers a glimpse of real talent, and leaves the reader eagerly awaiting the next installment.

Quill says: A compelling book of short stories that will leave the reader wanting more.