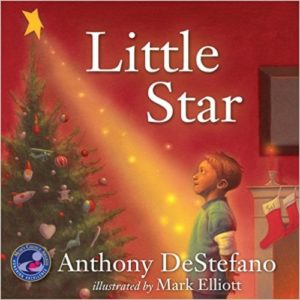 I admit it - I love children's Christmas books! Perhaps it's because I'm still a child at heart, but whatever the reason, I look forward to new books about the sacred season. Stories that impart Biblical lessons into their pages are a special treat. Books such as The Donkey That No One Could Ride, by Anthony DeStefano, with its charming tale and beautiful illustrations, hold a special place on my bookshelf. Thus I was looking forward to receiving the newest Christmas offering from Mr. DeStefano, Little Star, and I am happy to report that it does not disappoint.

Little Star blends fiction with the Bible story of Jesus' birth. On Christmas Eve, a young boy is looking out his window to see if he can find the Christmas Star. He asks his father where the star is, and is told, "...You won't find him. He's not up there anymore." Eager to learn what happened, the boy asks to hear the story about the Christmas star.

A long time ago, far up in the sky, there were many stars who happily "twinkle-talked" every night to pass the time. All the stars except for Little Star. He was so small that the other stars ignored him. The stars had a lot to talk about because there had been a rumor going around for a loooong time that a king would soon be born. The stars were particularly excited because there was going to be a special reward for the star who would shine the brightest on the new king.

When the night of the king's birth finally came, the stars went to look for the newborn. Little Star came upon a very poor couple in Bethlehem who could only find a stable to sleep in. Surely, thought the other stars, the child born to that couple could not be the king, but Little Star came to understand - that Jesus "humbled himself to be born in a stable..." and that the new king's message was LOVE. Little Star did his very best to shine brightly, but would he burn himself out?

This is a beautifully written story that perfectly blends a fictional story with the birth of Christ. By telling the story of the star that shone above the stable that blessed night in Bethlehem, it connects the star that we put on top of our Christmas trees to the Nativity story. The illustrations, as always in DeStefano's books, are beautiful and add so much to the story. When you light up the Christmas tree this year, share this book with your children to help them connect the decorated tree to the most important event in our faith.

Quill says: A delightful Christmas story that is sure to become a favorite at bedtime as well as around the Christmas tree.