Killing Willis: From Diff’rent Strokes to the Mean Streets to the Life I Always Wanted 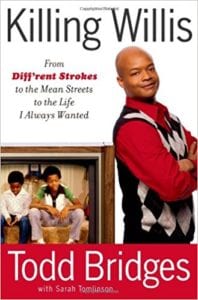 Killing Willis: From Diff'rent Strokes to the Mean Streets to the Life I Always Wanted

Todd Bridges was one of those youngsters who saw stars in his eyes, a la Hollywood. He wanted to be a star and with a few commercials, a supportive mother and a lot of luck he soon found himself starring in a series that would give him everything he wanted. Diff'rent Strokes gave him fame and, oddly enough, found him a father figure in Conrad Bain, who played Philip Drummond on the set. His own father was abusive and instilled fear in the family. Perhaps his father's drinking set the stage for Todd's later drug abuse, but nothing is ever a certainty, including lasting fame. He had another man who entered his life who was good to him, good in a surprisingly evil way, but Todd didn't understand that at the tender age of twelve.

Ronald, his publicist was there for him when his own father shuffled him aside. "Let me tell you something else," he said, "You can get the same feeling from boys that you can from girls." (pg. 65) This evil man wasn't the first sign of trouble in his life, but it wouldn't be the last. Todd wanted to crush out the pain of his life and began experimenting with drugs. Dana Plato, who later died of a drug overdose began her experiments as well. It wasn't the Pepsi generation any more. It was something much more insidious. Todd Bridges wasn't going to remain that cute little boy on Diff'rent Strokes forever. He would become a young adult, one that police loved to harass and fling the "n" word at.

He quickly learned that drugs became his best friend and claimed that "Drugs didn't seem like a big deal to us, and we were able to get away with a lot." (pg. 128) Really, did they? His self-destructive side began to surface and the drugs and body bashing accidents with motorcycles began to take their toll. Subconsciously Todd knew he was spiraling into the unknown, but didn't seem to care. "It was a brutal world. It really was. It was a world that was uncaring and unforgiving." (pg. 159) How did he get there? Why did he stay in such an unwelcoming world? But most of all how would he get out and who would rescue him from it? The streets were raw and brutal and a place that would eat you alive . . . just who was going to help Willis?

This is one book you are going to want to put everything aside to read if you were ever a fan of Diff'rent Strokes. The book hooked me from the first pages with a great lead and an excellent pace, but after the first hundred pages or so, the drug aspect was starting to get a bit tedious. It's easy to close a chapter on someone's life in a book, but I decided to keep on reading and didn't regret it. What happened to Todd happened to a lot of young people in that generation and, in all likelihood, will happen again. I kept on reading and got a thorough grounding on what happens to the good boy gone bad and the incessant drug culture in our country. The ending was a bit rushed, but regained its balance toward the end.

Quill says: If you want to read a grinding, raw tale of a young man who had it all, lost it and now is trying to move forward and put his past where it belongs, Todd Bridges will lead you down the road from heaven `n hell and back again!