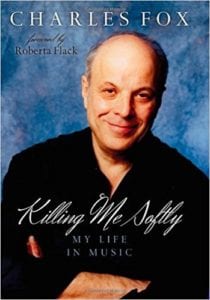 The Fox home was a kosher one and when young Charles wanted to strike out on his own as a musician, the best place for him to start was the Borscht Belt. In the 1950s, the Catskills were a draw for talent of all sorts, comedic, musical, and the fading Vaudevillian. Charles had a rare musical talent in his soul unmatched by anyone who had preceded him and those yet to come, but no one would really take note of a fifteen-year-old tinkling the ivories that summer. Charles, who hadn’t touched a piano until he was nine years old, quickly discovered that music would be his profession, a dream that his family would wholeheartedly support.

It was a chance meeting with his teacher, Nura Yurberg, that would provide the impetus that he needed to move forward in the world of music. She was out walking her dog late at night as he got off work and in passing she made mention of Paris. Not long after that he was “on a chartered flight to Paris, along with other students who would be attending the Conservatoire de Musique, in Fondainebleau, France for the summer.” (pg. 14) It was there that he would meet Mlle Boulanger, a musical instructor who had no equal. Charles knew that her fierce criticism was fodder for his musical growth and he naively shrugged off his money issues as his mentor always maintained she would accept some later. Mlle Nadia Boulanger knew he had talent and wanted to nourish it.

Charles, at eighteen, still longed for home and eagerly awaited his family’s letters. In his return letters, later preserved in a “shoebox in a dresser drawer in [his mother’s] bedroom in the Bronx,” his love of music poured from the pages. He was so immersed in his life with Mlle Boulanger in Paris that is wasn’t until many months later he thought to ask, “So ... how is my cat?” (pg. 49) His mother, Mollie, and his father, Walter, a “window cleaner,” struggled emotionally and financially to support his dreams. Notes flew from his mind as he transcribed his music onto sheets and later the letters home went out less frequently as he engrossed himself in his work. “Music is so much more than inspiration, beautiful sounds, organization of material, etc., etc. . . . It is a world complete in itself but accessible only to those who look to find it and understand it.” (pg. 85) Charles Fox had come to a crossroads in his life. It was time to leave Mlle Boulanger and Paris behind, start a family, and begin to compose. Where would life’s road take him? Would he be able to live up to the hopes and dreams that he had for himself? Those that others had for him?

This was an utterly fascinating biography of someone whose work we are familiar with, but simply do not know. The title of the biography is appealing, and is in fact why I chose to read the book, but there is very little of Roberta Flack in these pages. When Charles was inducted into the Songwriters Hall of Fame, he mentioned that he was pleased she found the song, but she kindly retorted, “No, the song found me.” (pg. 165) The first third of the book primarily consisted of letters home, but unfortunately the balance is lost because we are not privy to what the Fox family has to say to Charles. As a rule, I would find the lack of balance to be a conundrum, but I soon found myself immersed in the life of a young man who had no idea just how talented he was and was able to dismiss my reservations.

Charles’s utter lack of braggadocio was stunning and he would throw in lines such as the fact that he was “working on my third major film at the age of twenty-eight,” amazed me. (pg. 147) The biography is by no means a polished one, and that definitely had its appeal. The conversational style prevents Charles from becoming a name dropper and turns him into the type of person you’d love to simply invite over for a barbecue. Nonetheless, I get the distinct feeling he is proud of his work and grateful for all life has thrown his way. Charles Fox is a man I’ve always known about through his music, but never knew his name. Killing Me Softlywas a wonderful biography and if he were standing here, I’d simply have to say, “Thanks for the music!” What else can I say?

Quill says: Killing Me Softly will take the reader through the amazing world of music from opera to the technical processes of film scoring in Hollywood with Charles Fox, composer extraordinaire!