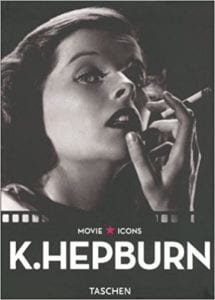 Katherine Hepburn, or “Kate,” as she was informally known, epitomized the era of Hollywood aristocracy. Indeed she had come from an aristocratic Eastern family, yet when this genuine beauty became known for her preference for pants, eyes began to open wide. She was a pensive, sensual, provocative conundrum who couldn’t have cared less what anyone thought of her, let alone her adoring public, yet became one of the world’s most famous and beloved actresses of all time.

What she couldn’t or wouldn’t divulge about her thoughts or personal life was subtly caught on camera, more notably on movie and publicity stills. She became the “first lady of cinema,” yet many in the industry considered her to be unattractive and lacking in sex appeal, a quality that filled the screen and the casting couches with young, beautiful women. Any woman with Katherine Hepburn’s sang-froid didn’t revel in such nonsense. Indeed, they dubbed her “Katherine of Arrogance.”

Inexplicably “David O. Selznick, who oversaw her early career at RKO, found her unattractive and refused to cast her in Gone With the Wind (1939) because she lacked ‘sex qualities.’” (pg. 12) The gorgeous, sensual, pulchritude of the black-and white-art photography in this book begs to differ. In William J. Mann’s 2006 memoir of Kate, the photographic portrait of her seems barren in contrast. Kate’s last image, which in part states that she was “impish, chubby, and adored the world over,” is not what her fans care to remember her by. Taschen captures the woman we saw, the woman we imagined her to be, and the woman we want to see and remember. They capture the very soul of Katherine Houghton Hepburn, a real American beauty.

This breathtaking photobiography will bring back fond memories of an American movie icon to its readership. As the pages are turned Kate comes to life and we can hear her voice and remember movies that once mesmerized us or that oftentimes can be captured on late night television. Many of the stills’ captions, in English, French, and German, are accompanied by memorable quotations. Even the simple musings, such as “If you always do what interests you, at least one person is pleased,” will bring Kate back to life. From the visual image of a “powerful sexy woman” to those “tender and tearful moments,” this is one book every fan should consider!

Quill says: Taschen captures the woman we saw, the woman we imagined her to be, and the woman we want to see and remember. They capture the very soul of Katherine Houghton Hepburn, a real American beauty.