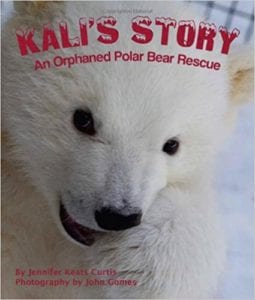 The polar bear den was a winter wonderland, filled with ice and snow. There was only one thing missing and that was a mother polar bear to take care and raise the cub she left behind. A little snow covered nose peeked up through the entrance to the den. “GRRRR,” he exclaimed as a man removed him. The little orphaned cub would not survive without help and it was time to leave. Vroom, vroom! The cub was whisked away to a nearby village where they would try to help him. It was there the cub received his name, Kali (pronounced Cully), named after the village. There was only one problem ... he was unable to eat.

Little fuzzy Kali was loaded into a large dog crate to head to North Slope Borough to visit the wildlife vet. He was healthy, but “like human newborns, the baby bear drank from his mother, not a bowl or a cup.” Kali needed to take yet another trip, but this time it was by plane to the Alaska Zoo where they could tend to him. Open wide! The “milk” from that bottle was “filled with fatty puppy formula and whipping cream.” Kali began to play with everyone, rolling in the snow and checking people out. He began to eat solid foods, learned to swim, and practice his hunting skills in preparation for yet another move. Where would he go next?

This is the amazing true story of Kali, the orphaned polar bear, everyone will fall in love with. One of the real draws of this book are the outstanding photographs of Kali from the time he peeked out of that den until he ended up at the Buffalo Zoo with Luna. A large portion of the book looks as if it were an actual photograph album, something that will make it accessible to all, including emergent or non-readers. The tale brings Kali’s story to life, animating him and making him into the loveable bear that has excited so many people. In the back of the book is an interesting look at the “Polar Bear Life Cycle” and several activities, including some that can be downloaded and printed from the publisher’s website. This would be an excellent book to read and discuss in the homeschool or classroom setting.

Quill says: Kali is just one of those little creatures that everyone, young and old, will instantly adore!