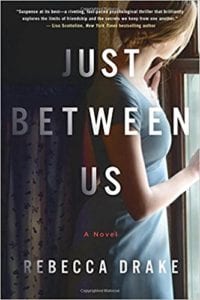 Alison, Julie, Sarah, and Heather may seem like a typical group of friends. They enjoy coffee after they drop their children off at school, some go to full time jobs while others are stay-at-home moms, but in reality, they are anything but typical. They all are hiding secrets, some more than others, secrets that can not only put them in danger, but hurt their families as well.

Alison works from home with an IT company and Julie works in real estate. Sarah and Heather are both stay-at-home moms. Although these four friends are not extravagantly rich by any means, they do live in a nice neighborhood with very little crime.

One morning as the ladies are settling into their favorite coffee shop, when Alison goes to receive their order, she notices something on Heather's arm. Heather, trying her best to hide it, didn't notice that her sleeve had risen up, exposing a bruise on her arm. When Alison asks her about it, Heather claims she must have bumped into something and brushes it off. Alison, concerned that it could be something more, lets it go, but brings it up to Julie. Alison thinks that it is possible that Heather's husband Viktor is abusing her. Julie doesn't think that there is anything wrong and that Alison is just being a little too paranoid. Julie talks to Sarah and they both agree that Alison is wrong and brush it off. They do not want to believe that Viktor, a well-known surgeon, could be hurting his wife. Although the ladies do not think that Viktor is abusing Heather, they do start to pay attention a little more.

One night while they are all at a party, Julie notices Heather and Viktor talking alone. Julie also notices that Heather looks a little tense while Viktor has a firm grip on Heather's arms. Not wanting them to see her, Julie tries to walk away, but Heather and Viktor notice her and rejoin the party like nothing ever happened. With Alison's theory in her head, Julie starts to wonder if Viktor could be abusing Heather. It isn't until the ladies are at the park with their children and they notice a mark on Heather's stomach, that they realize that Viktor is abusing Heather and that they need to help her.

After this incident, the group decides to have a sort of intervention with Heather. Heather, feeling as if she is being ambushed, finally agrees that Viktor isn’t the awesome doctor who everyone sees and confirms their suspicions. Although the ladies try to convince Heather to leave him, she refuses. Heather also informs the group that she is pregnant, which her friends think is even more of a reason to leave Viktor. As Heather continues to refuse to leave Viktor, her friend's concern continues to grow.

One night as Alison is sleeping, she receives the call that they all have been dreading. Heather calls Alison frantically in the middle of the night. Alison, worried that Viktor is about to do something, is surprised to hear that Viktor is dead. Alison, trying to calm a frantic Heather, rushes over while calling Julie and Sarah along the way. When they all arrive, they try to calm Heather down. Knowing, because of Viktor's injuries, that it would not look like self-defense, they come up with a plan to make it look like a carjacking, and take his car to the spot they picked out. Thinking that it is all over, and that they covered their tracks, they try to go back to normal.

The police begin an investigation and soon, the four friends start to worry that they may not have covered up everything and their nervousness grows. While they are trying to remain calm and continue on as normal, they receive a letter from someone claiming to know what the women did. The blackmailer has photos of that night and is planning on going to the police unless the women pay up.

The women are left to make a decision that could not only harm them, but will also affect their families as well. Their decision will change their lives forever.

Just Between Us is a really great book. The whole story is so suspenseful that I was not able to put it down. It is very well written with a lot of detail that makes you feel like you are there. There are so many twists that just when I thought I knew where it was going, it changed and it was something totally unexpected. When I first began Just Between Us, I thought I knew where the story was going, but admit I was very wrong - and that's part of what made this such a fun read.

Quill says: Just Between Us is a great suspenseful story that will show you just how much your decisions can alter and impact your life. It is a really great read.