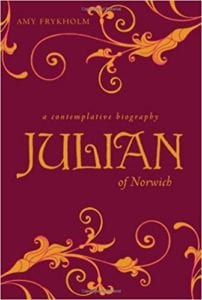 We have Julian’s book, A Revelation of Love, both an earlier version called The Short Text, which an anonymous scribe begins, “There is an anchoress—be the goodness of God,” and the longer version, which, Amy Frykholm tells us, is “theologically richer and more daring. God appears in this book as a mother and Jesus’ death on the cross is interpreted as childbearing labor.” (pg. xv)

But we don’t know for certain who this Julian was! We don’t even know if that was her real name or if the name was given to her after her enclosure beside the Church of St. Julian’s in Norwich, England. Julian lived during the High Middle Ages. Edward III was on the throne during much of her lifetime, and she died during the reign of Henry V. She spent her entire life in the bustling port city of Norwich in Norfolk, eastern England, south of the Wash (where King John lost the crown jewels) and north of the Thames. Historian Barbara Tuchman called the 14th century “calamitous.” There were wars between England and France, peasant revolts, famines, and the Black Death.

Until her enclosure around 1393 in a room beside the church, it’s likely that Julian lived an ordinary life. She probably learned housewifely skills from her mother, probably married, probably lost her children to the plague, probably tended the sick in the neighborhood and went to mass every day. Like Brother Lawrence of the Resurrection, who lived two centuries later in Louis XIV’s Paris and wrote The Practice of the Presence of God, Julian no doubt carried on an active inner life of prayer while living her outer life of service. Unlike the more famous Hildegard of Bingen (1098–1179), she probably never became a nun. It was over a century later when Martin Luther pinned his ninety-five theses to the door of the castle church of Wittenberg and launched the Reformation.

In May, 1373, Julian fell sick and nearly died. As Frykholm describes the scene, the priest came to give her last rites and held the cross before her eyes. Staring into the cross, she began hearing the words of Jesus. She came to understand the true meaning of his passion and death. When the officious priest left, an anonymous friar came to sit quietly beside her. After her recovery, she and the friar became friends and she studied theology with him. Now in the Middle Ages, women didn’t study or even talk about theology. All they were good for was to serve their masters. Englishmen who wanted to read the Bible in English were making trouble for the Roman church, and anyone suspected of heresy—especially an uppity woman—was liable to be arrested for listening to the devil. She would be burned. So Julian and the friar carried on their conversations in secret, and eventually she came to believe that her life would be more useful to her community if she withdrew from it to write down her visions. An anchoress lives alone, like a hermit, and her only opening to the world is a window with a porch for visitors. She is supported by donations and bequests.

Writing created exile. However close Julian was physically to her fellow churchmen, however many times a day she encountered them at mass, in her home, and on the street, she had begun to create a life apart. She was alone now in a country where no English woman, certainly no woman that she knew, had ever been before... She worried about the sin and error into which she would no doubt stumble as she began to strive toward a language for the inward teaching. She breathed in and out the words of Jesus, whispered in her own ear, “I keep thee full safely.” (pgs. 69-70)

This is a lovely book. Learning as much as she could about medieval English life, the author describes what Julian’s life might have looked like. She gives almost enough historical background and gives us word pictures of the city and the politics of the medieval church (not a pretty picture—there were two popes at the time). She also tells us how women managed to look after each other:

While large gifts did not come, small ones came every day... The women of the church knew that it was their duty to care for [Julian], and her duty to pray for them, so they were careful to provide her with what she needed [loaves of bread from the community oven, fruit, jars of jam, pennies in her alms box]. It was a relationship, not exactly of obligation, but of intricate mutual support. They believed that Julian’s prayers provided a blanket for them as solid, as necessary, as tangible as their own woolen weavings that hung on her walls to keep her warm. (pg. 84)

Quill says: The 21st century may well be fully as calamitous as the 14th. Let us remember and daily repeat Dame Julian’s words. All shall be well, all shall be well. Hold her words in your heart.