Journey: The Amazing Story of OR-7, the Oregon Wolf that Made History 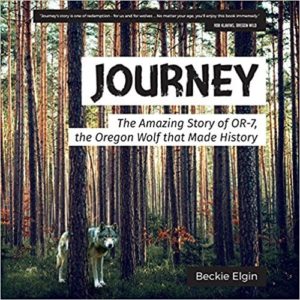 Journey: The Amazing Story of OR-7, the Oregon Wolf that Made History

Wolves are predators who normally hunt in packs and compete with humans for prey. Bison and other hoofed ungulates are their natural prey; but when their herds shrink too low, wolves may turn to hunting cattle or sheep. Human societies traditionally feared and hated wolves. Once plentiful in the United States, thousands have been killed by guns, traps, or poison. At times federal and state governments have paid hunters a bounty for every wolf they had killed.

The wolves were almost all gone before scientists discovered they are a keystone species who were needed to maintain the natural balance of any ecosystems they inhabit. This book presents the case for the preservation and protection of wolves through the story of one remarkable animal who was named OR-7. When he was two years old, he was spotted from a helicopter, darted by a tranquilizer gun, and fitted with a collar. This devise enabled biologists to track his movements.

Most wolf cubs stay with their parents and join their park, but OR-7 was an exception to this rule. He left his family and began moving around Oregon and California. Before he found a mate, his journey took three years and covered 4,000 miles. When records of his journey were publicized, he became world famous. Two movies were made about his adventures. When a public contest was held, the winners gave him the name of "Journey."

In the twentieth century scientists began to study wolves and the author of this book drew on their discoveries and her own experiences to write a series of delightful stories about Journey's life. She began with his first adventure when he climbed out of the den to get his first view of the outside world. Her stories show wolves as ambient animals who are gentle and playful with each other. When OR-7 decided to leave his home and family, she described what he saw as he wandered around Oregon and California. When Journey finally found his mate, a detailed description is given of how they found and courted each other.

This book was created for middle-grade readers, but it can be read and enjoyed by older children and adults. The text is arranged in a somewhat complicated format that is packed with detailed information. It is well illustrated with many photographs, maps, and some sketches. Appropriately, it ends by quoting Rudyard Kipling's poem, "The Law of the Wolves."

Quill says: A must read for anyone who is interested in wolves or rewilding.