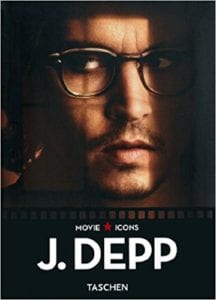 In this fantastic series of books, subtitled Movie Icons Series Taschen has produced book after book highlighting a variety of film stars that the world all knows and loves. The introductions of the books are offered in English, French, and German, for readers around the world to enjoy; but the pictures – from the stills to the movie clips – are truly what make these books outstanding.

Johnny Depp was first introduced to the American public by means of a television show called 21 Jump Street.Almost immediately, his beautiful looks and high cheekbones got him plastered on the covers of every teen magazine in the free world. Like the boys of Twilight are to the world nowadays, Johnny once ruled young teenage girls’ hearts everywhere. Soon, however, he decided he really didn’t like the fame that came with his “idol” status, and wanted to be something more. He wanted more than anything to use his acting skills to actually bring remarkable characters to the screen and tell unforgettable stories to the public.

His very first success at this was the wonderfully kind, sweet character of Edward Scissorhands. Johnny certainly dropped his “handsome” exterior for this role, letting his sad, dark eyes captivate the audience. Not only was this one of his most powerful performances, but it also began the team of Johnny Depp and Tim Burton – a team that has brought to the screen a “masterpiece” every single time they’ve come together to make a film.

The “Bad Boy of Hollywood,” which was Depp’s main career, was soon behind him, and the actor emerged as one of the finest in Hollywood. Gone was the young man who ruined hotel rooms, tattooed women’s names on his arms, and focused his work on music. In fact, right around the time River Phoenix overdosed and passed away outside of Johnny’s club The Viper Room, was when Mr. Depp seemed to turn his back on the press and his petulant past, and set his sights on becoming the best actor he could possibly be.

From the funny and poignant characters like Ed Wood, to the slightly creepy, elusive roles like Sweeney Todd, to the completely odd, Ichabod Crane in Sleepy Hollow, Depp has managed to become a multitude of different people without ever pigeon-holing himself into a certain genre. In What’s Eating Gilbert Grape, he was a young man who had to get out from his small town and leave behind the problems he simply couldn’t face. In Don Juan DeMarco and Chocolat’ he became that leading man that all females fall off their chairs for, as soon as he opens his mouth and that fantastic voice slithers smoothly from the screen.

There are so many Oscar-worthy performances that it’s completely impossible to name all of them in this review, but the photographs offered will bring readers back to the first time they were mesmerized by Depp on screen. Now that Johnny has settled down, found his Mrs. (don’t we all hate her), and had children of his own, his biggest roles seem to be that of calm citizen, happy man, loving father, and, thankfully, the immortal Captain Jack Sparrow.

Quill Says: Where Depp is concerned, we all wait with our collective breath held to see what amazing role he will come up with next. A man who decided to go his own way, Depp has literally been entertaining us for years and, hopefully, for many years to come. This book is a lovely collection of pictures for all fans to enjoy.