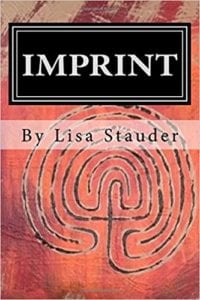 Remember those days of “imaginary friends?” What if those days didn’t end upon maturation? What if those friends turned out to be a whole heck of a lot more? Well...after reading Imprint, not only will readers have a cool time, learn about an interesting piece of history, and be able to meet, greet and relate to a variety of characters, but readers will also find themselves questioning whether or not we simply “accept” the norm because it’s easier than making waves.

Leah is a seventeen-year-old girl who has been ‘traveling’ in her dreams for years. She has been able to see and hug those who have gone before, and even has the ability to take back messages to the rest of the family. For example: she met up with her great grandmother and brought a message back to her grandmother in regards to a treasure of sorts that was hidden underneath the floorboards of her grandparents’ house. In addition, Leah has always heard and seen, mind you, since she was a toddler, two girls named Amy and Jessica. Not just in dreams, but during the day, as well. Leah’s mother believed that it was one of those adorable traits when she was a kid, although Leah’s father knew it was more than that. As Leah grew, her mother became more and more frustrated by these various ‘gifts’ her daughter had, while Dad was simply waiting for a time to explain to Leah what they were all about and how to use them properly.

Soon, Leah’s horizon is opened by her father’s side of the family. She is taught many things about her abilities, dating back to 1641 and the Pequot tribe that lived in what became the State of Connecticut. Leah learns facts in regards to how people lived and exited the earth at one time before subscribing to the “normal” way in order to not scare people. She was also shown a place called ‘The Labyrinth’ which ends up being a core piece of the story.

As the reader follows Leah through her own path of enlightenment, many things are touched upon from the true art of tattooing, to ‘traveling’ in other bodies, viewing incidents both bad and good happening in life, the theory of guardian angels, a family’s attempt at understanding and acceptance, and the wisdom and spirituality of grandparents as they bestow the future generations information they should be aware of in order to live a full life.

As it is with prejudice in other forms, there are a great many who make fun of those who believe they have abilities that cannot be proven, so to speak, by scientific fact. However, everyone has these gifts; they simply choose to go with the “norm” and give titles to the unknown, such as déjà vu, in order to explain them away. Imprint gives an interesting take on this gift. The only downside to this book is the formatting troubles. There is punctuation left out, as well as tabs omitted so that at times the actual structure of the paragraphs is a bit messy. Although these issues may, to some readers, detract from the book (which is unfortunate), it is important to remember that this author has not only put together a fun story, but she has also put her own experiences on paper in a tale that can be enjoyed. And a tale that, perhaps, will have people stop closing the door on something that is labeled “unknown.”

Quill says: It is true that we leave an imprint on other peoples’ lives. This is a great read for those who want to laugh, love, and learn about that imprint.

For more information on Imprint, please visit the author's website at: www.LisaStauder.com