How to Survive the Worst That Can Happen: A Parent’s Step by Step Guide to Healing After the Loss of a Child 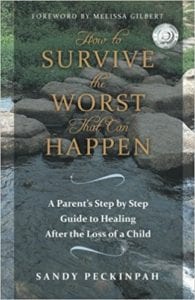 How to Survive the Worst That Can Happen: A Parent's Step by Step Guide to Healing After the Loss of a Child

Admittedly, Sandy was “caught up in the magic of fairy tales” and walked not only the literal Red Carpet with her husband, David, but also that of motherhood. As a mother she was a star among four beautiful, shining ones in her life, Garrett, Trevor, Julianne, and one-year-old, Jackson. Although there were whimsical and fleeting hopes that David would one day write a script that would launch the family into a real fairy tale existence, the day-to-day reminders like bills brought Sandy Peckinpah down to earth. A growing family couldn’t be fed on dreams and things like philosophical musings were best left to others.

Any dreams that Sandy may have had for a star-studded existence would soon be shattered. "Lots of fluids and ibuprofen to keep his fever down," the doctor ordered. "He should be better in a few days." Yes, as mothers we’ve all heard that before. Add a cool compress and a dollop of loving care and call the doctor in the morning. Instead, Garrett’s heart stopped suddenly during the night. A virulent case of undiagnosed bacterial meningitis shattered the family into a million pieces and a young soul had flown into the universe, never to return again. Sandy’s fairy tale existence had turned into a nightmare, one in which her child would be “16 years, three months, and ten days ... forever.” Life would never, ever, be the same and the entire family was thrown into a deep abyss from which there seemed to be no return."

“You wake up in the morning,” Sandy later claimed, “and for a brief moment, you believe your loss was a terrible dream, and then it hits you.” There was no going back and the shift into the reality of Garrett’s death was staring her in the face. There were her other children to love and cherish, and the needs of young Jackson couldn’t be put on the back burner while she grieved. Yes, Sandy would go through Elizabeth Kübler Ross’s five stages of grieving, but would need to add one to the list ... resilience. The “haze of emotions” was overwhelming, yet there was a wealth of support around her, although she may not have recognized it at the time. There was her best friend, Melissa Gilbert, Paula, her “angel in the night,” and others who stepped forward to surround the Peckinpah family with a cocoon of love.

Sandy’s greatest gift to Garrett would begin one word at a time. She began to write, to move forward, and would eventually teach others how to do so as well. “No, you never forget,” she later explained. “You never get over it. You just learn how to live with it.” In this subtly soothing book, she explains how she taught herself to do just that and helps others via “Stepping Stones.” Sandy explains everything from planning the service to those first steps of recovery to the ultimate end ... healing. For those who are suddenly faced with a journey toward recovery they don’t wish to contemplate after the loss of a child, this book will be an immense comfort. How to Survive the Worst That Can Happen is not only a tribute to her own child, but one for every parent who has lost theirs. This book is a powerful, thought provoking, and singularly stunning guide to recovery.

Quill says: If you, or someone you know has lost a child, there’s no better gift you can give than a way to survive and flourish. In Sandy Peckinpah’s book, you will learn how you can heal and eventually bring joy back into your life.

For more information on How to Survive the Worst That Can Happen, please visit the book's website at: www.HowToSurviveTheWorstThatCanHappen.com