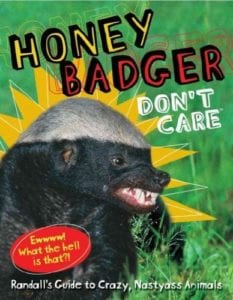 "Badges? We don't need no stinkin' badges!" I’m reminded of that memorable line, first made famous by the 1927 novel, The Treasure of the Sierra Madre, given homage by Blazing Saddles, and later modified by the Weird Al Yankovic film UHF into, "Badgers? We don't need no stinking badgers!” as I read the new book, Honey Badger Don’t Care. Funny, very irreverent, and yes, even educational, this book will have some adults laughing out loud and others cringing at the, er, "colorful" language.

Randall, “The crazy Nastyass Honey Badger,” made famous by a YouTube video with over 27 million (yes, million,) views, takes the reader on an adventure, introducing him to some serious “badass” endangered members of the animal kingdom. From a honey badger taking on a lioness, to a Tasmanian Devil showing a fully stacked mouth of nasty teeth, this book is full of pictures and facts about creatures that most people know little about. Ever hear of the Pink Fairy Armadillo? Nope, me neither. But it really is pink on top with white fuzz beneath. I learned some interesting facts about this creature and now know that while they are cute, these little armadillos aren’t to be messed with. While several of the animals profiled in this book are well-known (the opossum, the wombat), others, like the Solenodon, are likely new to the reader.

Like the video, the language in Honey Badger Don’t Care is about as “colorful” as you can get, with four-letter words in abundance. But while the video has the voice, and snarky attitude of "Randall" to add humor, the book loses that humor and instead the language overpowers the story after a few pages. Take note – this is NOT a book for children. As the promos for the book say, this is an animal book for adults. If you can move beyond the language, there are some great facts in here.

Quill says: A fun and educational book for adults that gets a bit “lost in translation” from video to book.