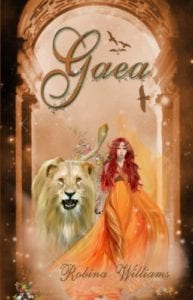 Looking for a book that offers something different? How about a story that seamlessly blends Christian fantasy with Greek mythology? In Gaea, the third book in the Quantum Cat series by Robina Williams, you’ll meet Greek gods and goddesses along with angels, saints and even the Almighty Father.

This intriguing story starts with Gaea, the Earth goddess, coming to terms with all the horrible things Man has done, and is doing, to her beloved planet. Her animals, both in the woodlands and the seas, are crying out to her. Deciding to take action, Gaea wants to destroy humankind but then Quant, a seraph (a member of the highest order of angels) disguised as a cat (and yes, Gaea does know his true identity) does his best to convince Gaea that there are many good men worth saving. The clever cat takes the goddess to a friary where the members are doing everything they can to take care of the Earth. Still, Gaea wants to stop the destruction going on throughout her world so she seeks an audience with the Heavenly Father.

During her meeting with the Almighty, Gaea is frustrated because she is reminded by God himself that “…To me belongeth vengeance and vengeance is mine: I will repay.” If Gaea cannot destroy mankind, what can she do? How can she get man to respect the Earth without hurting any humans? The beautiful goddess, with Quant still at her side, decides to descend to the deepest realms of Hades to enlist the help of her son Briareos, a 50-headed giant. She also asks Aeolus, the keeper of the winds, and Demeter, the goddess of the harvest, to help. Will they, working together, be able to stop mankind’s destruction without hurting a single human? Will they all willingly work together in their quest (hint: it is decided that one of them would reek too much havoc to participate, but which one?).

Gaea is a fun, unexpected story that in the end is really about taking care of our planet and the ramifications of our actions if we continue on our current path. The author does a wonderful job of creating believable and likeable characters, even if some do live in Tartarus. I particularly enjoyed the character of Cerberus, the three-headed hell hound whose neck is ringed with snakes. In mythology, he is a terrifying creature, who guards the gates of the underworld, eliciting screams from all who meet him. But to Gaea, Cerberus is a lovable dog who isn’t used to fresh air and so needs help getting up steep hills. Indeed, the author injects plenty of humor throughout her story. For example, when Briareos refuses to help the dog, “He wanted to come with us so he can damn well walk…” it isn’t long before the dog “…was nestled in Briareos’s arms, and three tongues licked the giant’s faces affectionately.”

After a quick start in chapter one, Gaea goes a bit astray with several tangents that, although interesting, have little to do with the plot. For instance, we meet St. George and St. Sebastian, who are working in the heavenly design center, designing the intestinal track and skin for a snake that will inhabit a new planet. It’s a fun concept but goes on for much too long. Their design problems intrigue Gaea and she invites them to lunch and an interesting conversation follows, but surely the saints’ work could have been addressed in less than the multiple chapters their exploits covered. Likewise, when Gaea meets Briareos for the first time, she says she wants to talk but feels deepest Tartarus is not the right place. They decide to go to “Hades’s place,” but that trip takes over 20 pages. The imagery the author builds along the way is interesting, but it slows the story down quite a bit. Still, even with the excess text, Gaea is an enjoyable story.

Quill says: An unusual blending of Christian fantasy and Greek mythology that will keep the reader wondering what character from the Bible or mythology will pop up next